Between Lot and Célé, on the paths celebrated by UNESCO

You are in the causses, an arid land on the plateaus, and greener in the canyons. The most important causses in the region are the Causse of Gramat, near Rocamadour, and the Causse of Limogne, on which a good part of the stage takes place. These two causses belong to the Quercy Regional Park of Causses. You are in the Lot department and the track heads southwest.

What is a causse? This word comes from the Occitan Cauce, which means lime, therefore limestone. Contrary to popular belief, its origin is more cultural than geological. It therefore has a peasant meaning, representing the eroded plateaus and the upper slopes of the valleys hollowed out by the rivers of the Massif Central, where they devote themrselves mainly to breeding, with a little cereal crop, including triticale, barley, and a little wheat. Geologists attribute to this region the denominator of karstic relief. A karst is in fact a limestone massif most often, fractured, cracked, in which water circulates underneath. Let’s say a few words about karst. This word, which may appear barbaric, comes from a region of Slovenia known for the diversity of these limestone geological formations. In France, they call karst a causse. In karstic reliefs, water, rather flowing on the surface as in many regions, seeps into the subsoil. The water will gradually eat away at the rocks. The result is a complex network of cavities, caves and underground rivers. The Padirac chasm, near Rocamadour, is the most famous example. The path from Figeac to Cajarc will unfortunately not allow us to contemplate these wonderful caves offered by nature. It will be necessary to be content to walk on arid high plateaus, with sometimes very slight canyons.

When, soon after Figeac, the pilgrim arrives at Béduer, he has before him a difficult choice, either to continue on GR65 path, the pilgrimage route, or to take GR651 track, the variant of the Célé Valley. Today you’ll follow GR65 path. Until Béduer, the GR65 and the GR651 merge. The variant by the Célé Valley will be treated in another chapter. The route is between Célé and Lot, on Limogne Causse. You’ll enter until Cahors into a huge forest of oaks. Here, it is not the elegant cork oaks. These are common oaks, most often stunted and lean, which are also called downy oaks. But their shade is generous for the pilgrim who walks. Sometimes agriculture and animal husbandry are expressed at the top of the plateau, when the forest is less pressing.

In the past, GR path climbed above Figeac heading to L’Aiguille du Cingle, where there is a beautiful obelisk, near an industrial area. Then, a small road passed through the countryside to reach La Cassagnole. Since then, the route has been changed to avoid passing through the industrial area.  GR path takes another route to arrive at la Cassagnole.

Difficulty of the course: Slope variations today (+595 meters /-618 meters) are very reasonable for such a long stage. We walk up as much as we slope down. If not at the exit of Figeac where the slope is very steep and the descent to Cajarc, the stage of the day does not represent many difficulties. On the causse, the altitude varies from 300 meters to 400 meters.

Today, you’ll travel more often on the paved road than on the dirt road. Fortunately, the most beautiful part, on the causse, is above all on magnificent pathways in the undergrowth:

General overview of the difficulties of the route: the climb is often tough, sometimes at well over 15%. Once on the plateau, there is no more difficulty.

In the dale, the day is breaking over the meadows and the cattle. 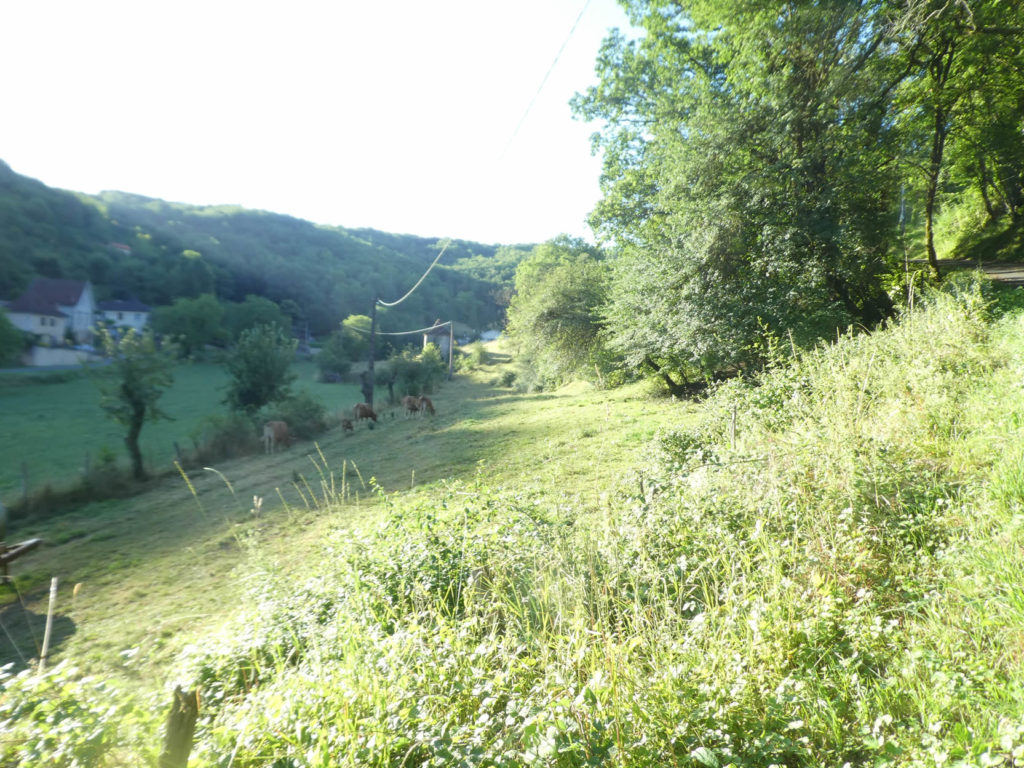 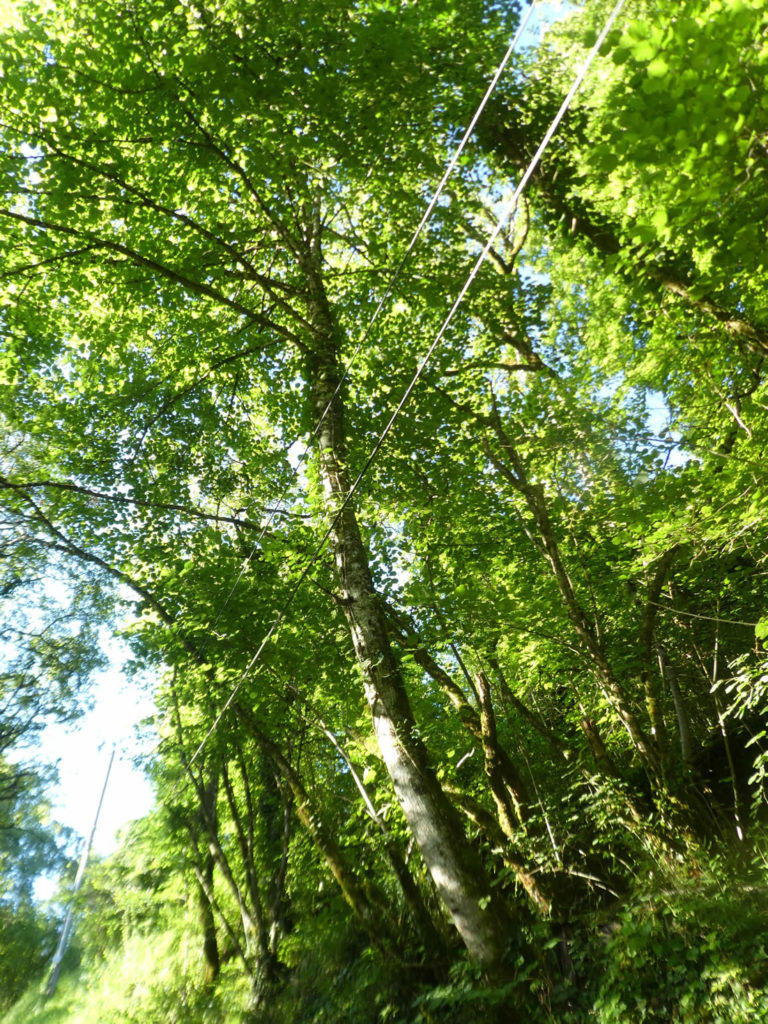 General overview of the difficulties of the route: course without any difficulty, on the paved road.

You have not actually reached the causse yet. You navigate in the foothills, in a country of gentle hills dotted here and there with groves, rare cultivated fields, vast meadows, sometimes with an isolated house which is lost in the vast nature. 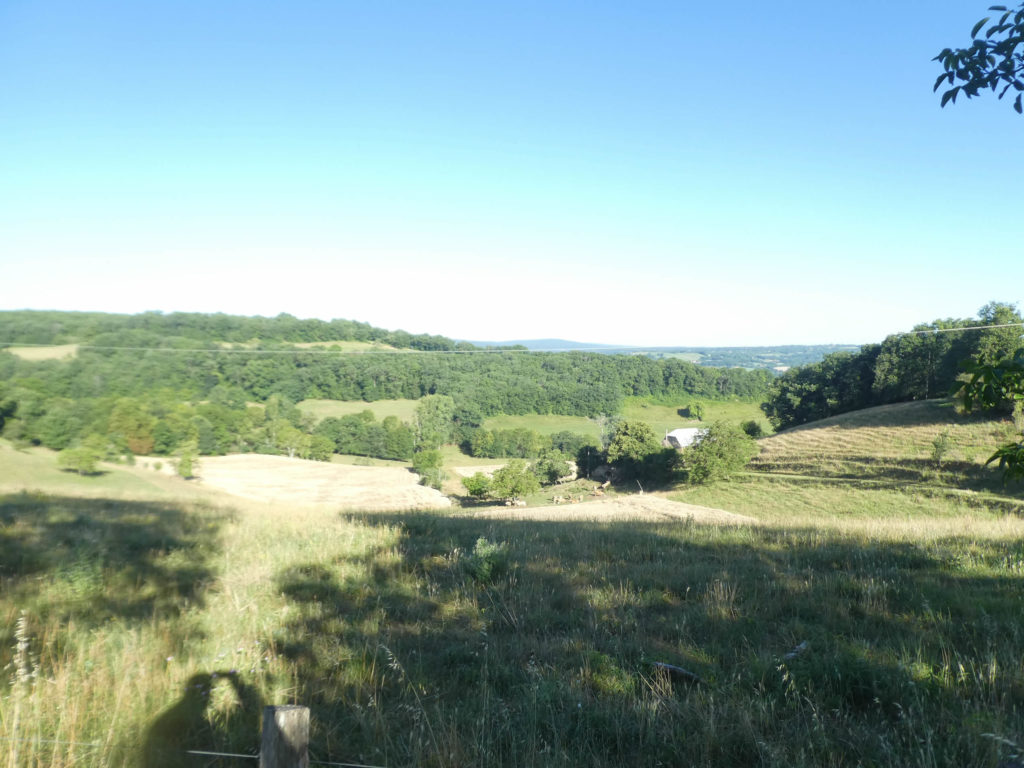 Private, you think you are dreaming! What could we do in this pile of rubble? Maybe picnic or steal some stones. 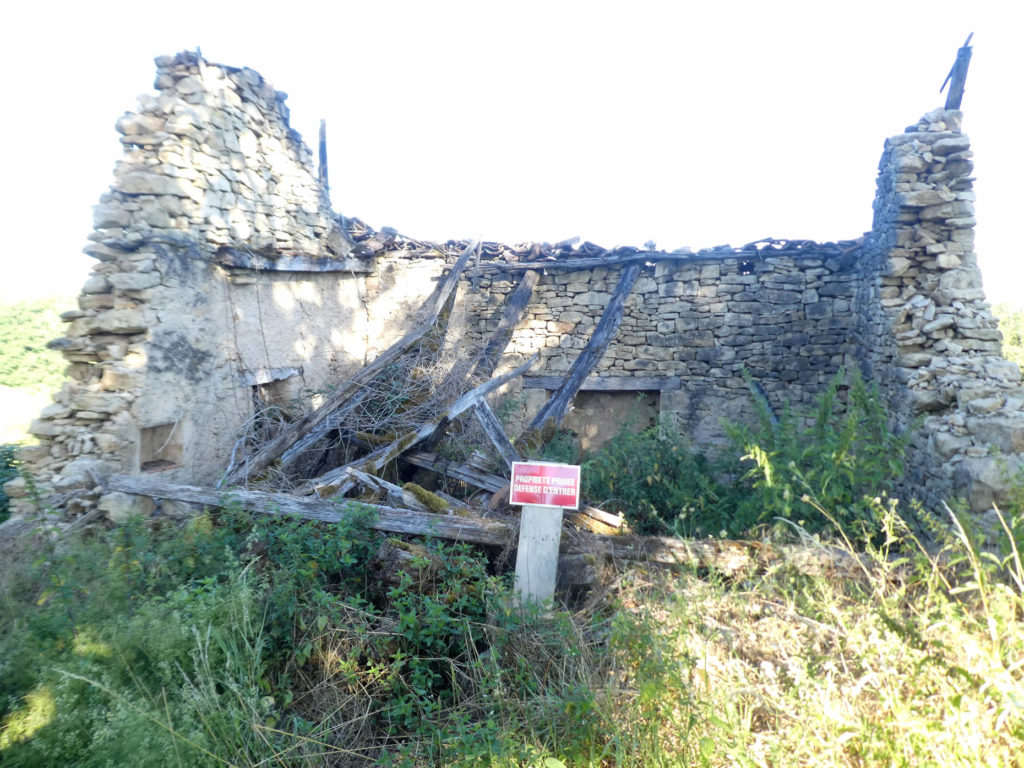 Here, a beautiful house with its shiny “caselle”, where you can stay, is hidden under the large trees. 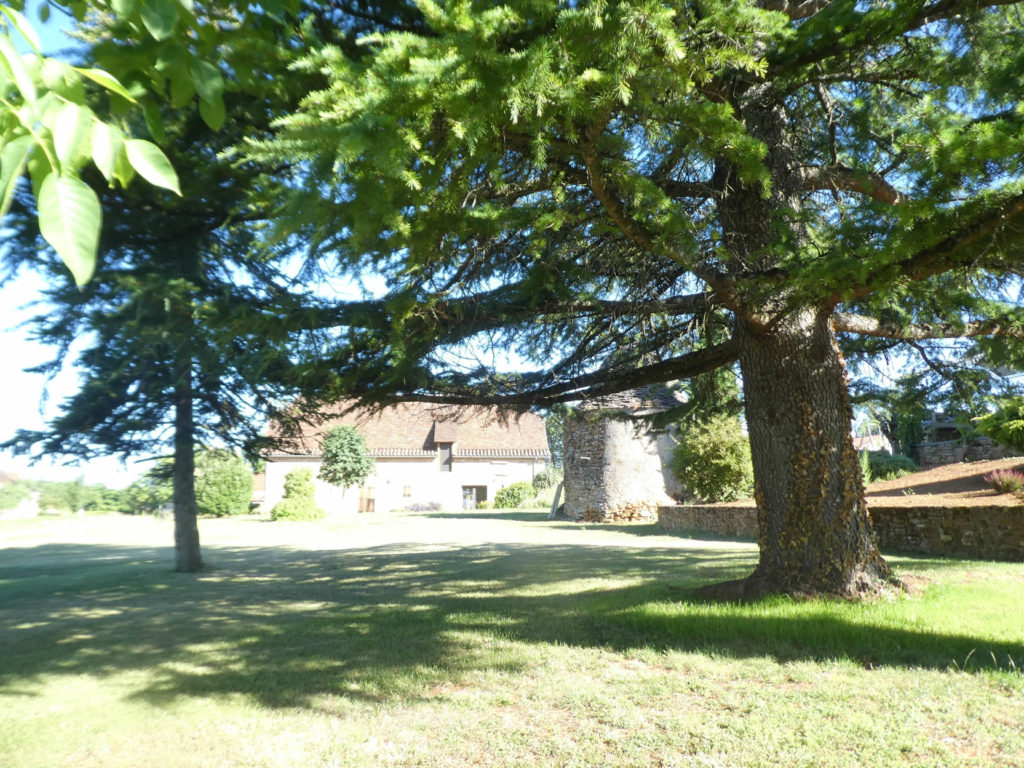 The small round watchtower overlooking the valley, the Gaillarde tower is all that remains of a castle which once stood in the center of the village until its destruction by Richelieu in the XVIIth century. 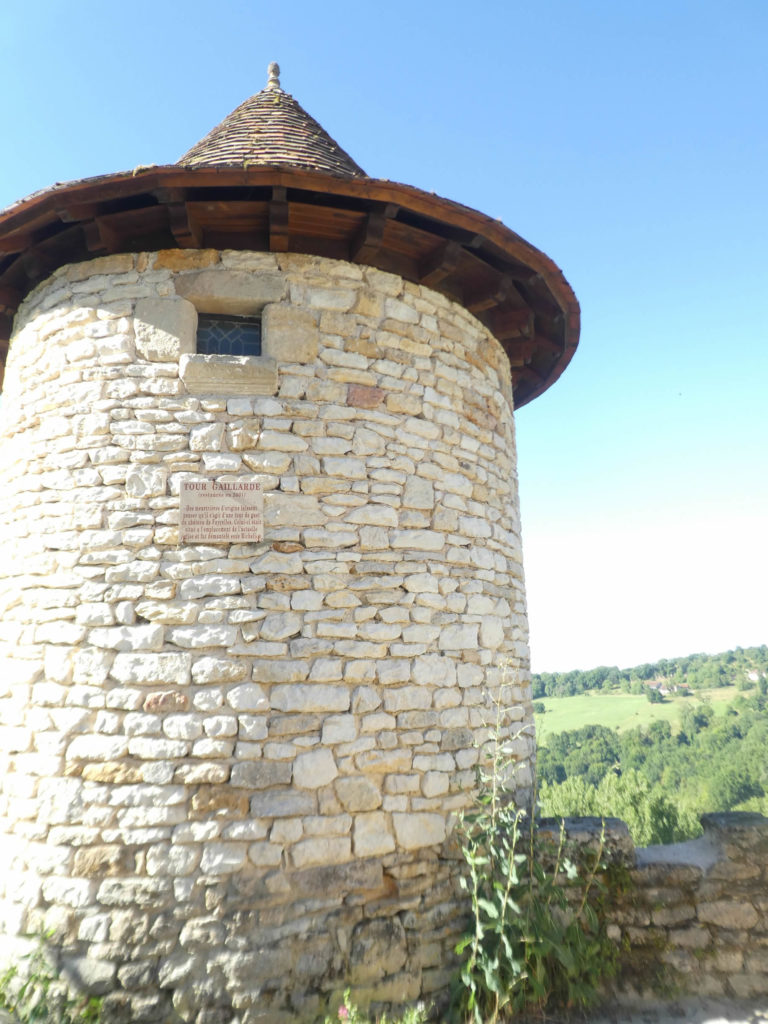 From here, the view of the Lot valley below is as far as the eye can see. The eye discovers only thousands of trees on the horizon, immense and dense forests which advance and are lost in the interior of the country, the deep valley where the Lot flows peacefully, the high plateaus which follow one another. without being distinguished, effacing each other. 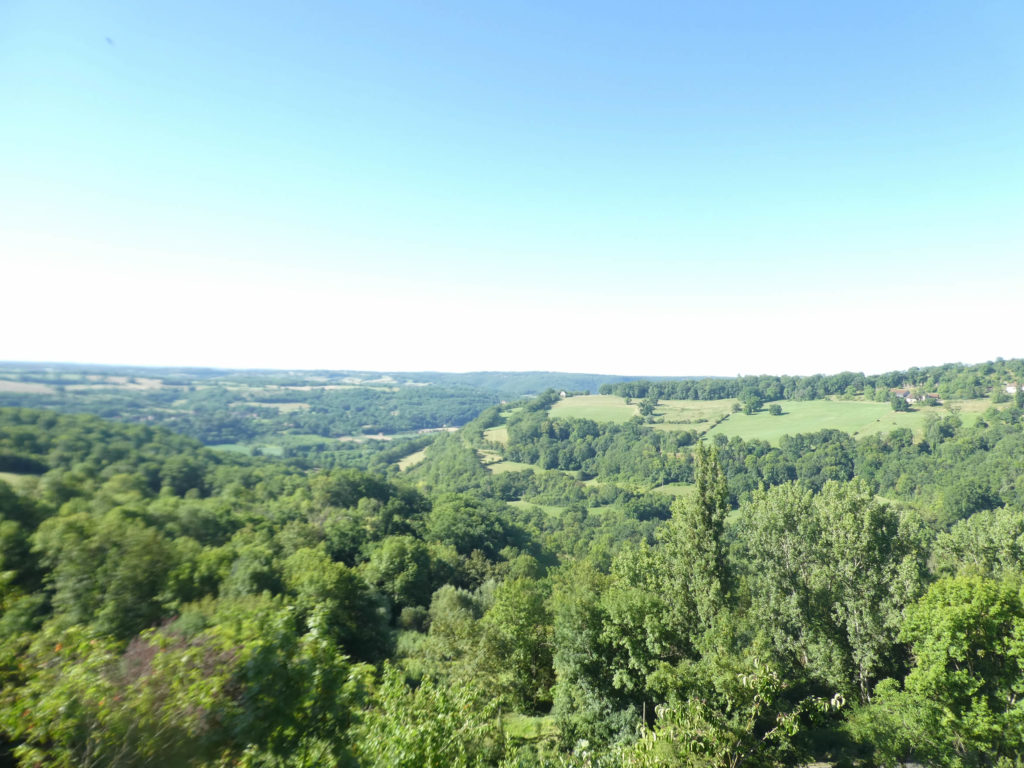 The pathway passes in front of a large cave carved out of the raw limestone, which will perhaps serve as a night refuge for penniless pilgrims or those fond of wild camping. There are quite a few of them on the way, especially young people. 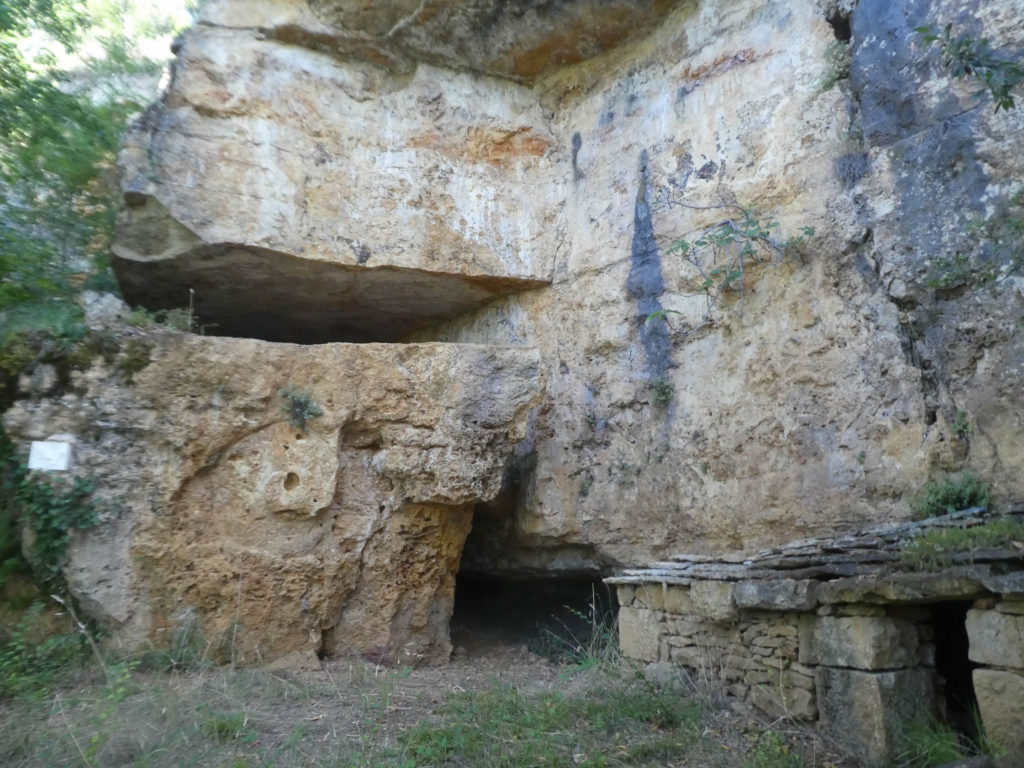 It passes near a place called La Source, perhaps also dried up, who knows? But the setting is so beautiful in the wilderness. 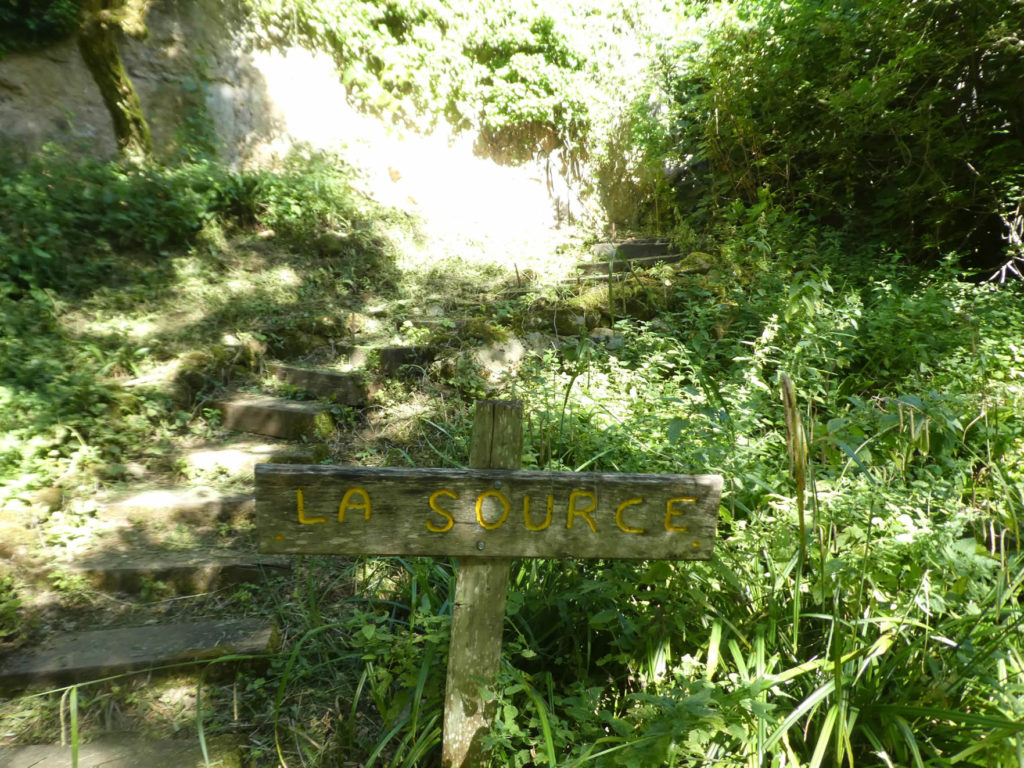 Section 3: Undulations in the countryside.

General overview of the difficulties of the route: some bumps without great importance.

Further down, the pathway passes near the picturesque Fontieu fountain, which seems to have emerged from the Middle Ages. 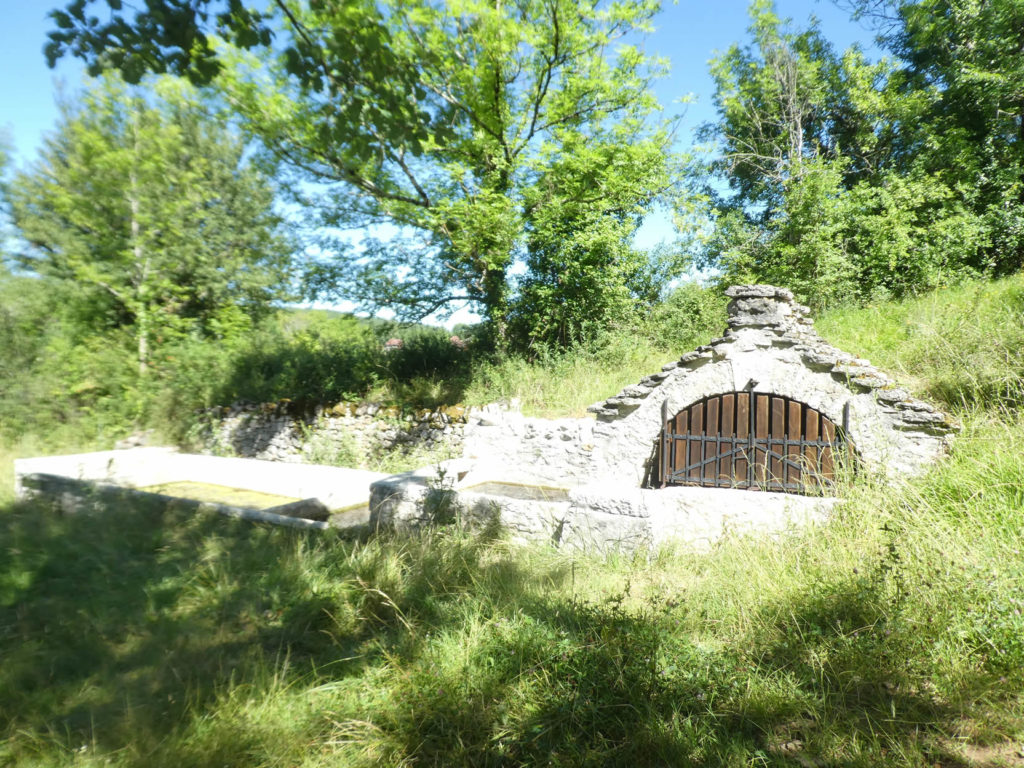 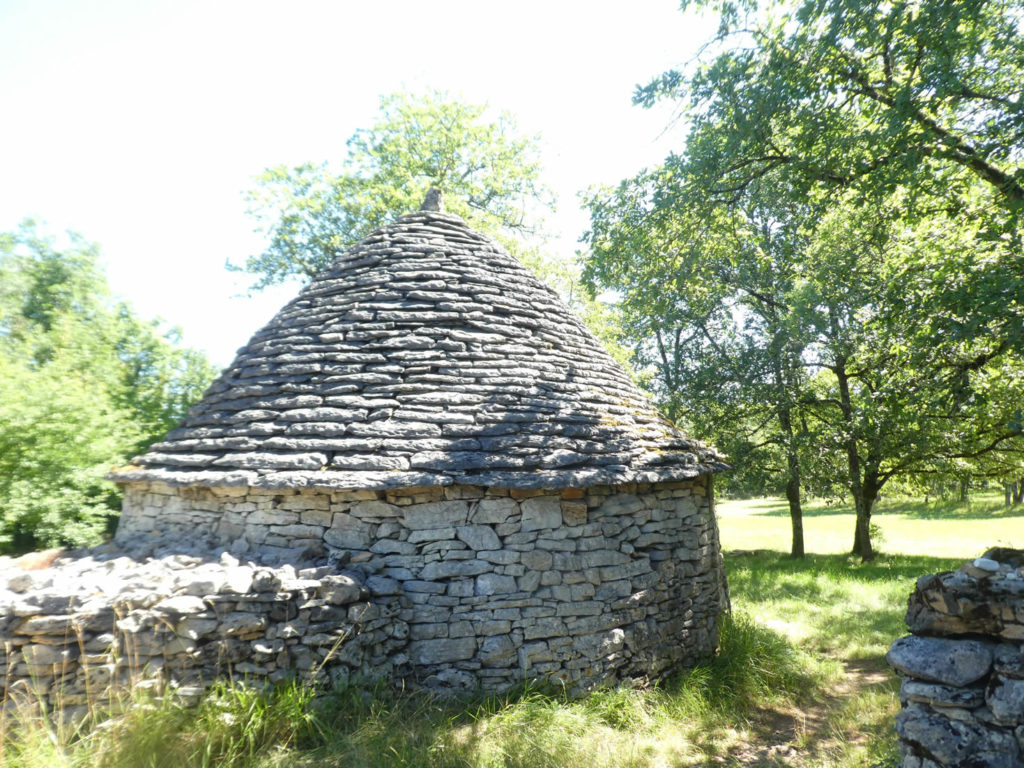 Section 5: The walk continues on the causse.

General overview of the difficulties of the route: course without any difficulty, on magnificent paths.

Here, the hamlets are almost nothing, and you often find stone houses where life has disappeared. Nature is alive, constantly renewing itself, drawing its energy from its own reserves. Men’s homes quickly turn into ruins when they lose their use. Ruin is unfortunately the vocation of human architecture. Will we one day see the Causses as an archipelago of abandoned hamlets surrounded by wasteland, forests and maquis evolving according to their own energy? It is true that oaks live without asking man for anything. Perhaps we should explore the reasons why the 22.5 km of the Camino de Santiago from Faycelles to Cajarc were listed as World Heritage in the sections listed by Unesco? The return of Rousseau’s good savage in a way, right? However, the journey through the oaks remains an exceptional experience. 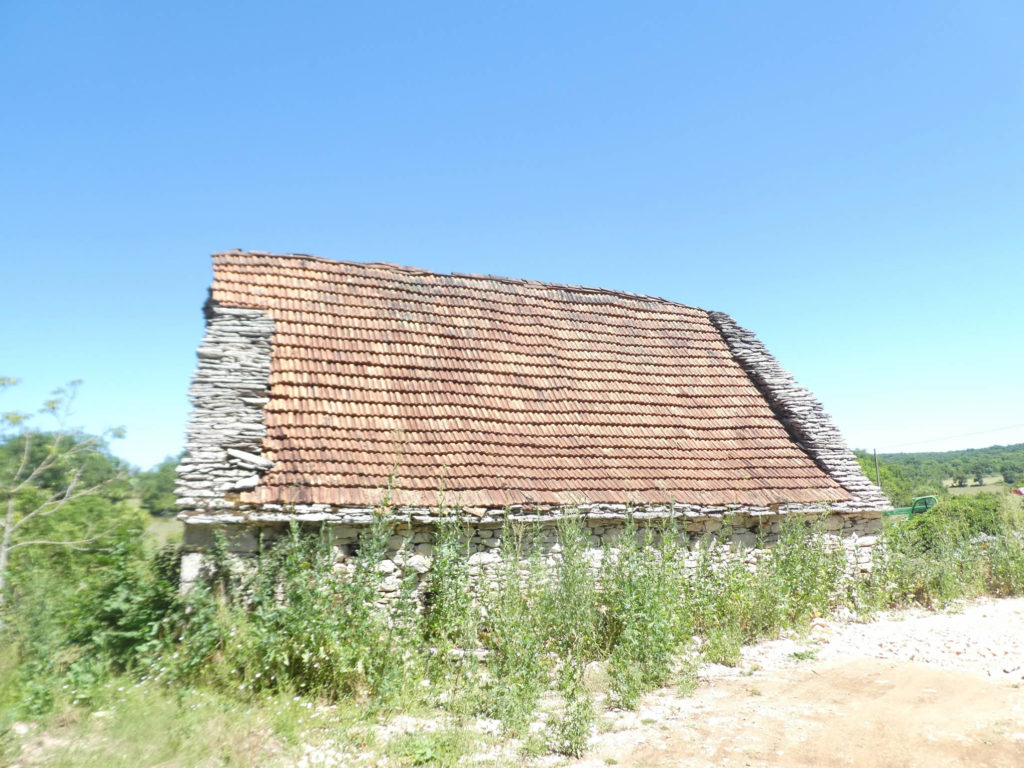 Section 6: Passing near the magnificent dolmen of Pech Laglaire.

General overview of the difficulties of the route: course without any difficulty, on magnificent pathways.

You may one day meet strange pilgrims here who also carry their load, or more comically, petanque players, who come here to share the life of pilgrims! 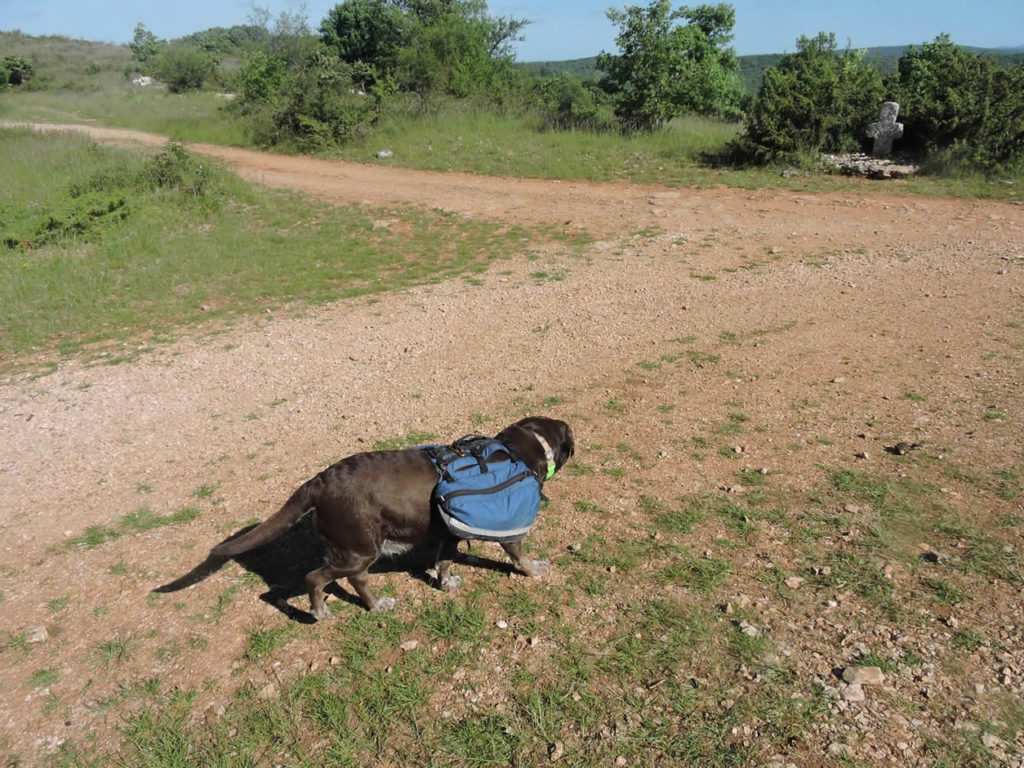 Then GR path slopes down into the forest of Coston. Why not say it? How can you not be soothed by a wide path which undulates between the small walls covered with moss, the dry-stone sentry boxes, and above all, the countless stunted oaks, probably several hundred years old, which raise their big rough heads? These paths have a scent of yesteryear, one that tells the story of the past, that of millions of pilgrims who may have struck the same stones with their boots. Who knows? You cross here one of the most beautiful landscapes of the Santiago track. We must also agree with the people who have classified this stretch of road as a UNESCO World Heritage Trail. 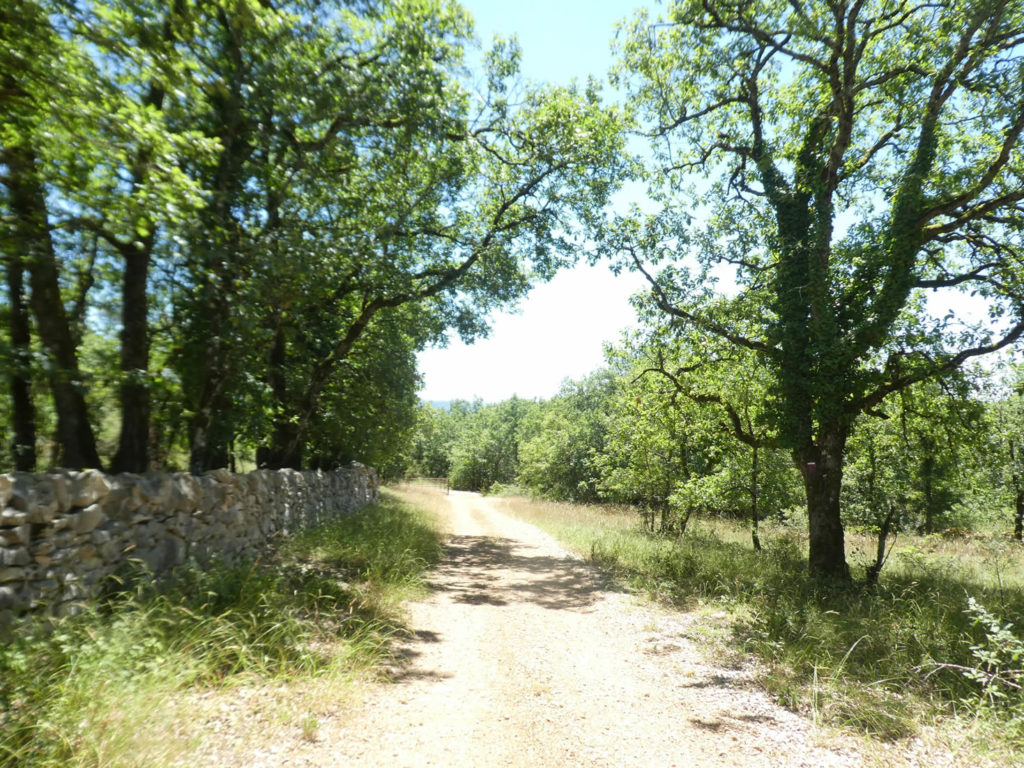 Section 7: Light ups and downs between countryside and undergrowth.

General overview of the difficulties of the route: course without great difficulty.

You are near Pech Granat, which GR path skims without going through, 6 kilometers to Cajarc. 300 meters away, stands a rather exceptional gîte in lush greenery and undergrowth. 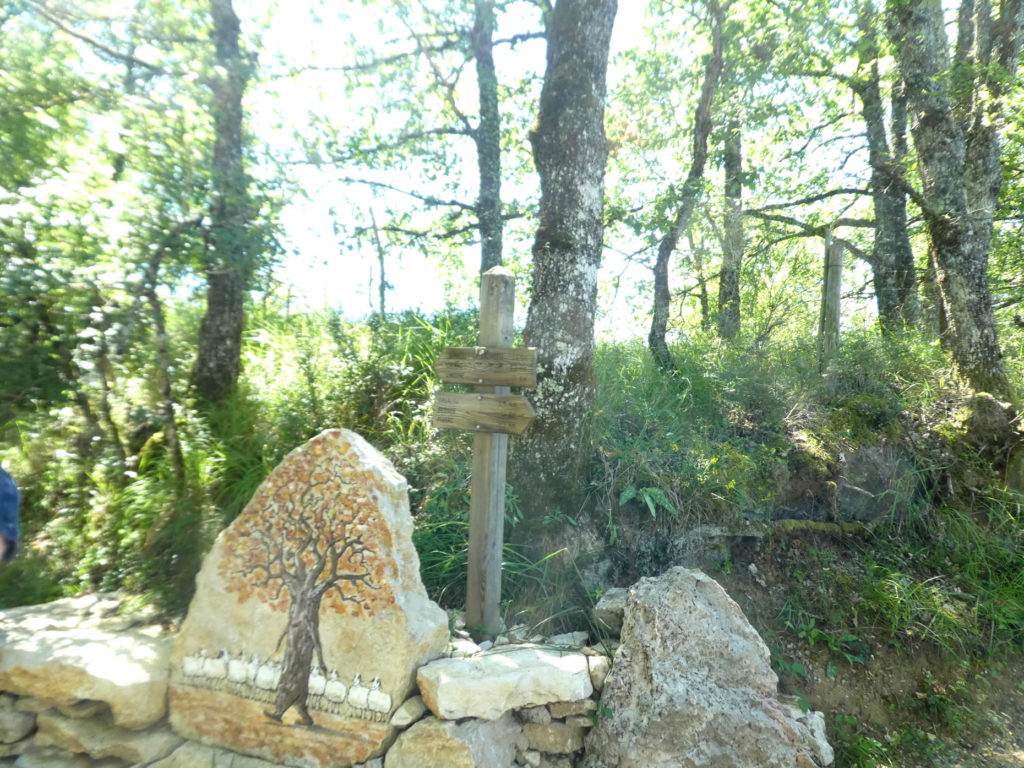 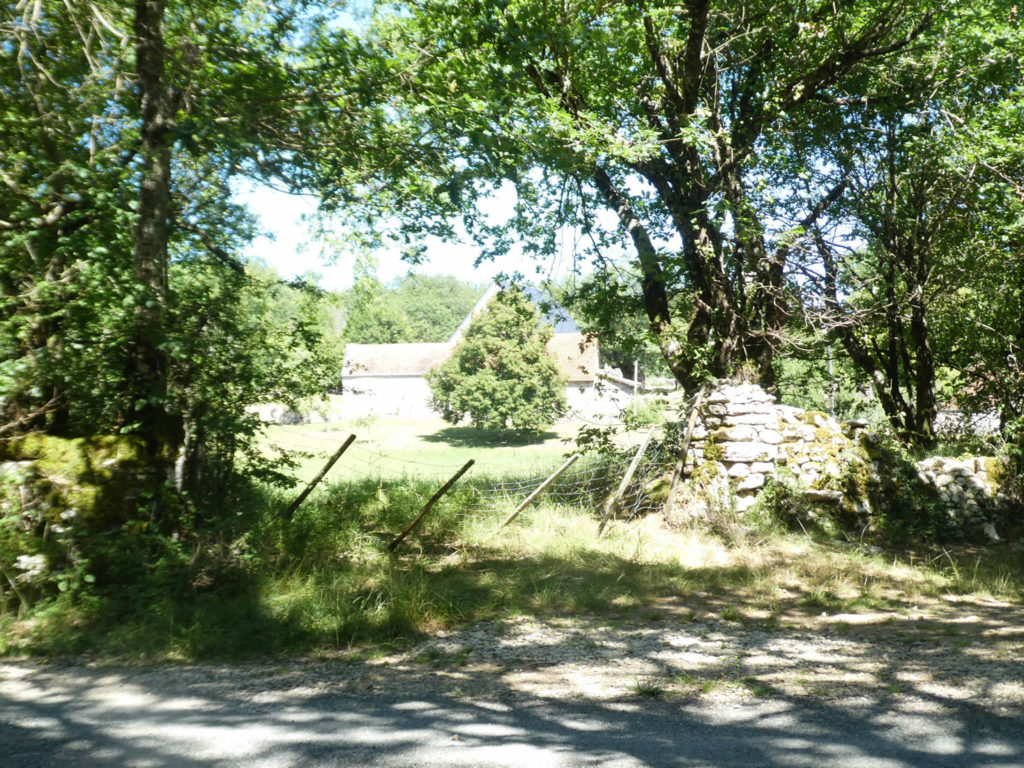 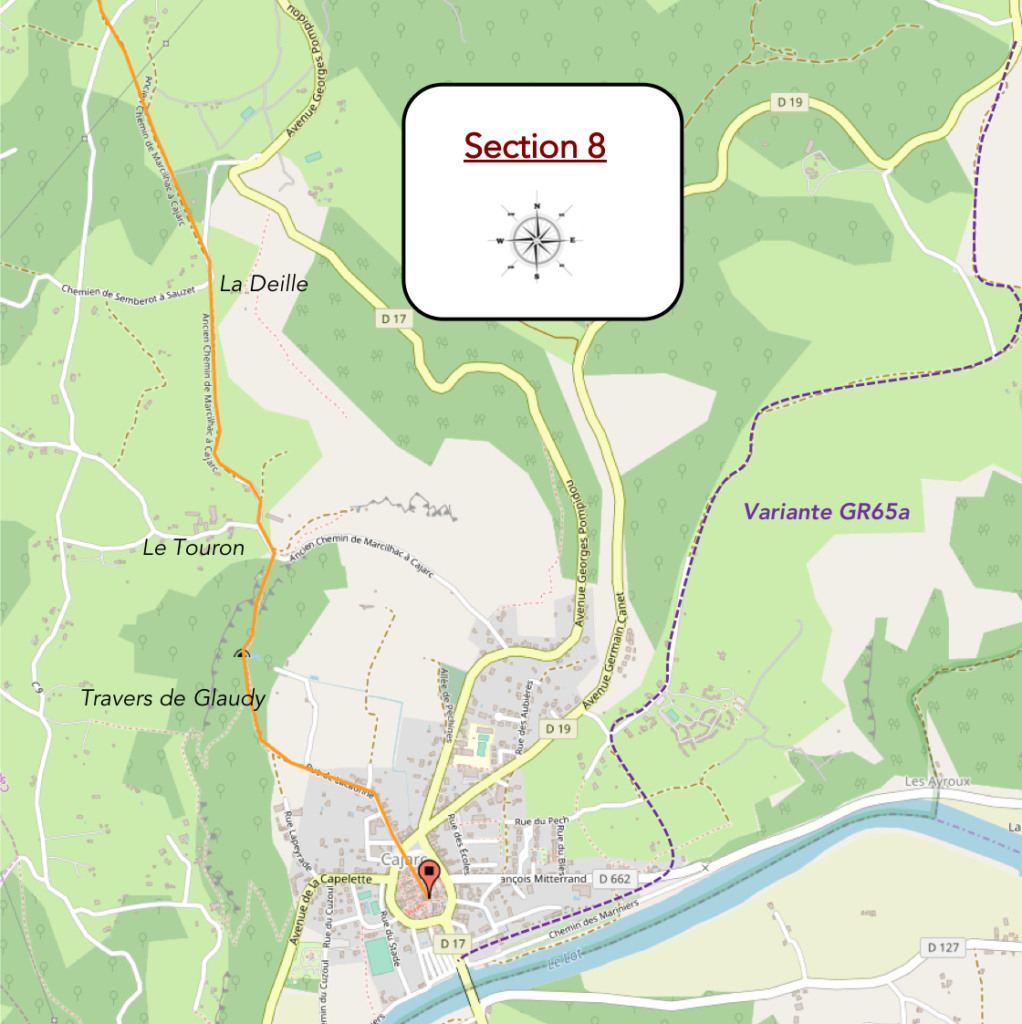 General overview of the difficulties of the route: demanding slopes in the cliffs above Cajarc. 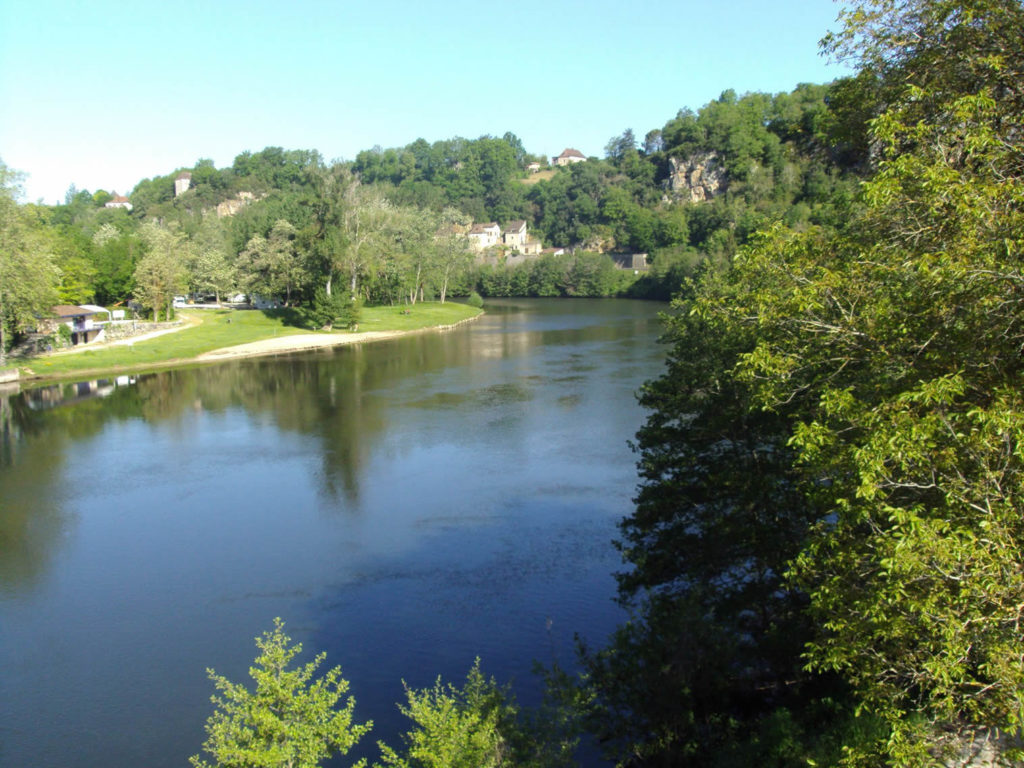 Saffron, which comes from an Arab-Persian word for the color yellow. Real saffron are the stigmas of a flower (Sativus Linnaeus). Cajarc is the largest producer of saffron in the Lot. Saffron production extends over 7 departments, with 70 producers. In all, it produces between 6 and 8 kilograms, which represents more than 2 million flowers harvested by hand. It takes about 200 flowers to make one gram. Count around 30 € for 1 gram. It’s more expensive than gold!
For more information, see: http://www.safran-du-quercy.com