Somewhere in the vernacular heritage of the vast Causse de Limogne 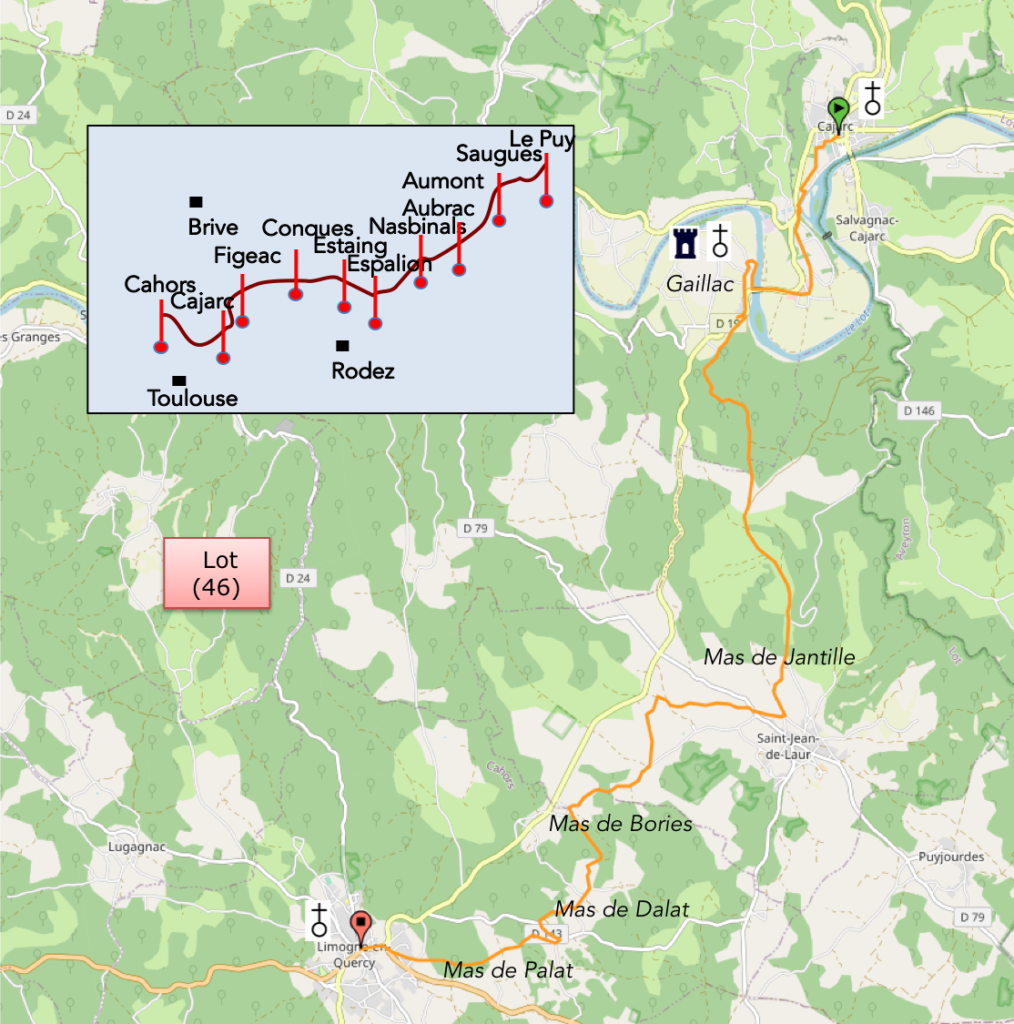 Today’s stage takes place in the Causse de Limogne, which is also part of the Causses du Quercy Regional Nature Park. You leave the verdant Lot Valley to get in touch with the aridity of the causse. In this kingdom of stone and oaks, truffles sometimes grow here at the foot of the dolmens. Today the track falters Lot River, heading towards the south of Lot department. Here, no mountains on the horizon, just the majesty of the causse.

The vernacular heritage is present everywhere on the stage. The countryside is strewn with dry stone walls along the paths, called here “cayrous”, more numerous than the “caselles” or “gariottes” that you now know well. As with the “caselles”, the “cayrous”, cayrous originate from the stone removal of fields to allow sowing. But these stones were also used to build curious villages of flat stones. Near the water points appear curious wash houses, called “butterfly wash houses”, used for washing clothes until the XXth century. The magnificent dovecotes, which compete in style and composition, cannot be overlooked. Formerly called dovecotes, they were used to attract pigeons, which provided valuable fertilizer. Here, owning a dovecote was the outward sign of wealth. But now, time has passed. Many dovecotes and many dry-stone buildings are abandoned or in a serious state of disrepair. This is also what makes the charm of the causse. Here, no big villages, but islands of grouped houses, which they call here mas. There is more than a dozen such hamlets in the region.

Here again, in recent years, the route has been modified near Gaillac. But, this is a minor change, which only adds a kilometer, which will be said to be unnecessary, to the previous course.

Difficulty of the course: Slope variations (+402 meters /-241 meters) are quite reasonable, but the stage is short. As is often the custom on the Camino de Santiago, the stopover towns are in the plain and the path gets lost on the heights. Today’s stage is no exception. You have to leave the Lot plain and climb to arrive on the causse. Thereafter, the path undulates in ups and downs without big difficulties.

Here is a stage where you will walk as much on the tar as on the dirt:

Section 1: A short trip around the Lot loop.

General overview of the difficulties of the route: generally, a gentle slope to Gaillac, except for a few short steep paths before the chapel, on the way out of Cajarc.

Immediately, a chapel stands at the edge of the road overlooking Lot River: the chapel of the Madeleine, known as the Capelette de Cajarc. The XIIIth century leper colony, which was linked to it, gave hospitality to pilgrims crossing the causse.

The road then approaches the piers of the old bridge.

A stone’s throw away, just above in a cirque of hills, you can see the church of Gaillac from the bridge. In the past, after crossing the river, you had to follow the paved road that runs along the banks, slightly uphill to the outskirts of Gaillac. But now, the organizers of the trail have concocted a new program. A small detour of nearly 1 kilometer is offered to allow you to taste the charms of Gaillac. Certainly, in the minds of the organizers, departmental roads should be avoided as much as possible, even if the traffic is not extravagant here. Moreover, many pilgrims who read the map carefully before setting off are well aware that the track emerges from Gaillac higher up. They don’t care about the detour. But as we are obedient in wanting to describe the entire track, we will take the detour to Gaillac.

The village is home to the castle of Salvagnac-Cajarc, an austere building, dating back to the origins of the XIIIth century, deeply transformed into a dwelling house.

General overview of the difficulties of the route: slopes, often more than 10% to climb the causse (almost 150 meters of vertical drop in just over a kilometer), then unimportant ups and downs.

Here, Montpellier maple, with its three-lobed leaves, is present in abundance. 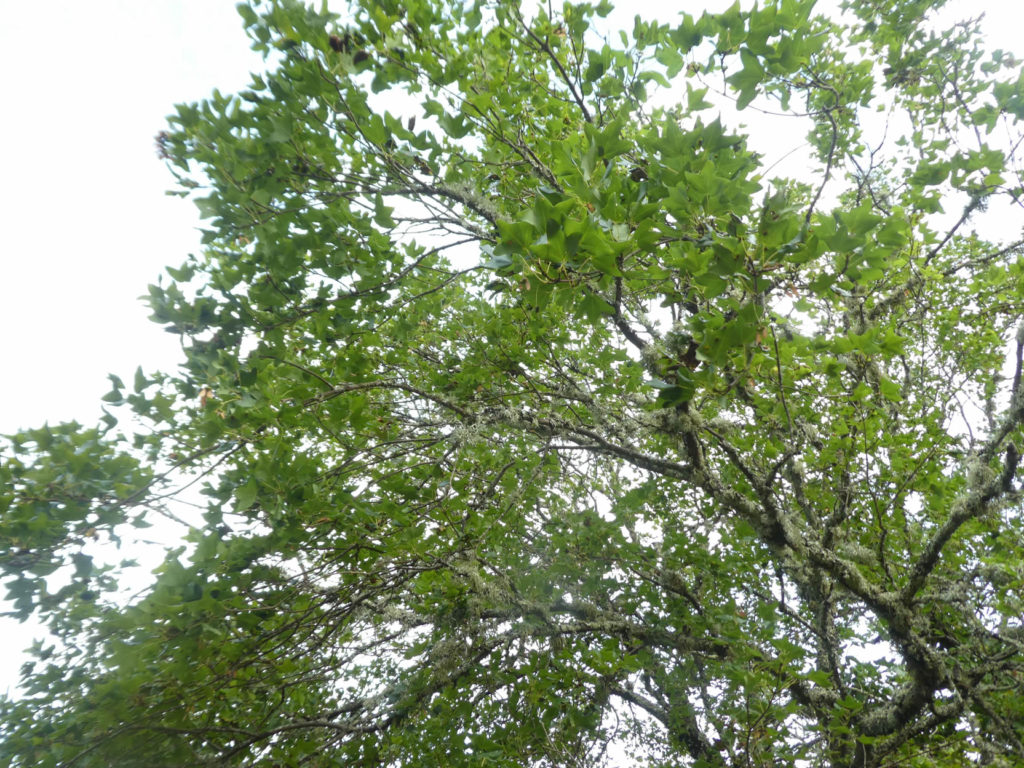 As if you were there, on a bright day….

Section 3: In the vernacular heritage of the Causse de Limogne. 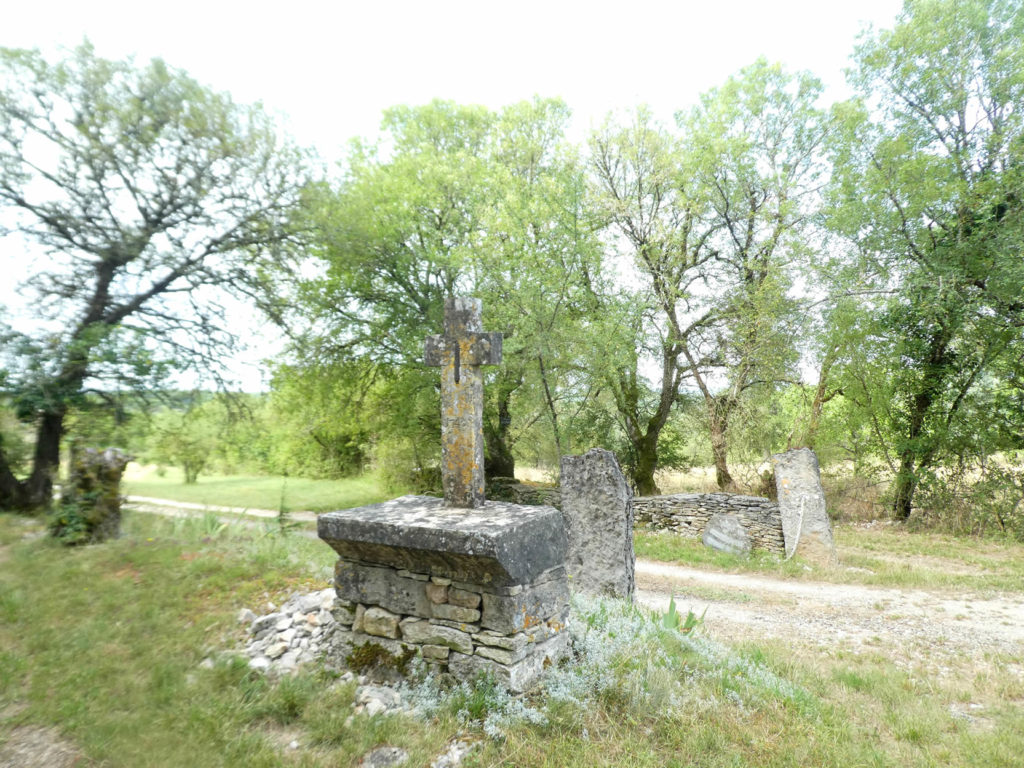 The green, stagnant water of the pond, which only the croaking of toads in spring brings to life, continues to have its share of mystery. However, in recent years, butterfly pond carps have migrated here.

Wild beauty bursts forth everywhere in the causses, whose origin hesitates between the word hot and the word rock. These are the two that make up the whole. Everywhere, limestone is exposed to the surface, in the houses, on the stone walls. Rainwater quickly seeps into the soil, rarely stagnates. The soils are poor and sheep often graze only a short steppe. The cows are a little more fortunate, and they are sometimes assigned beautiful pastures, between the oak groves. 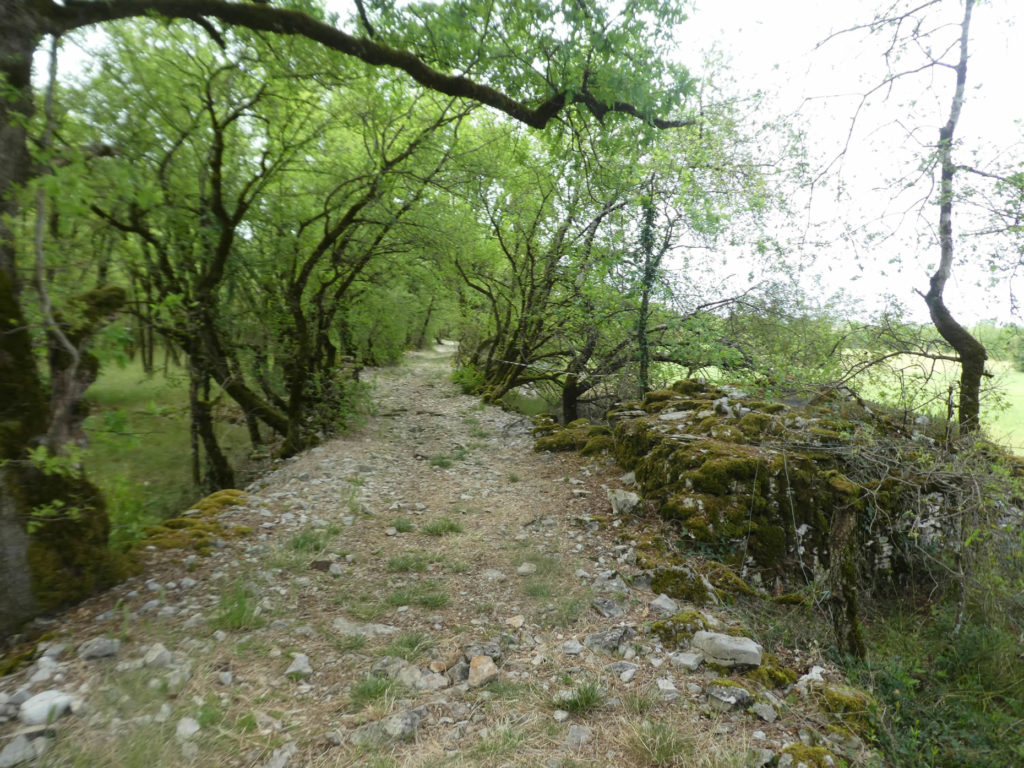 Section 4: From one “Mas” to another.

We are going to offer you here brighter images of this timeless heritage, taken in another period..

At the foot of the village, it is still the Middle Ages that remains by the wayside, with the vernacular heritage, in other words the small heritage, that which brings together wealth often neglected, the use of which is lost over time. Who would still use this butterfly wash house whose limestone has eroded over time and has become covered with fungi? What about that rusty water pump that probably no one could turn on yet? 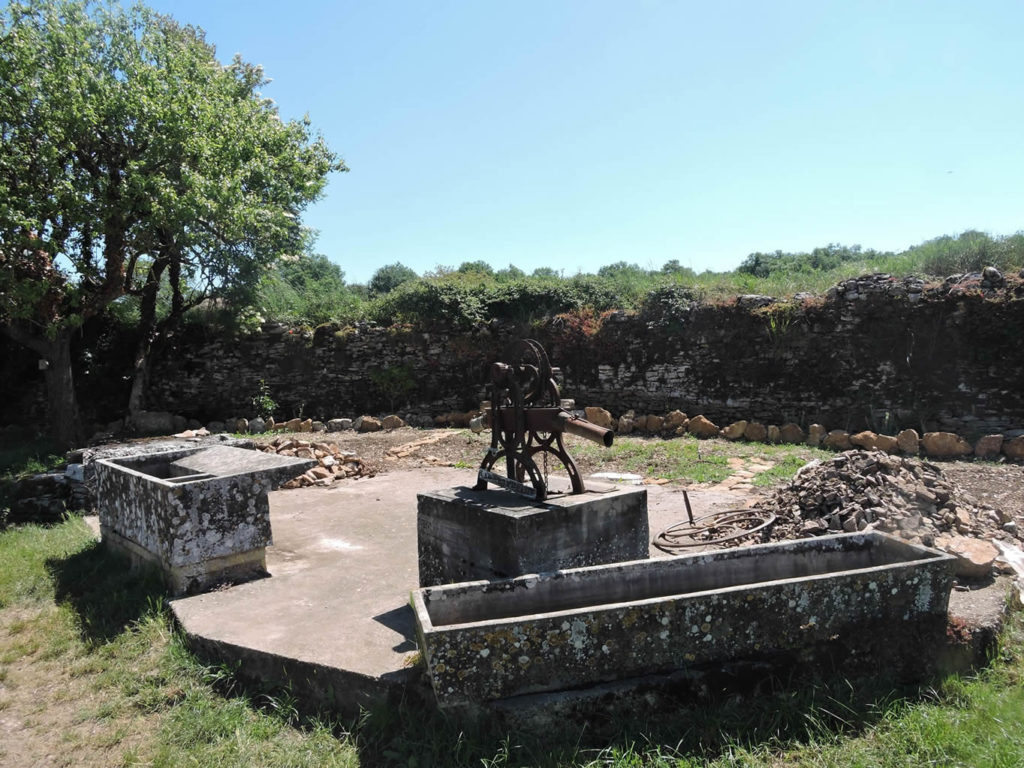 Who would dare to go soak those feet in the stagnant water of the pond if it wasn’t for the toads in late spring? 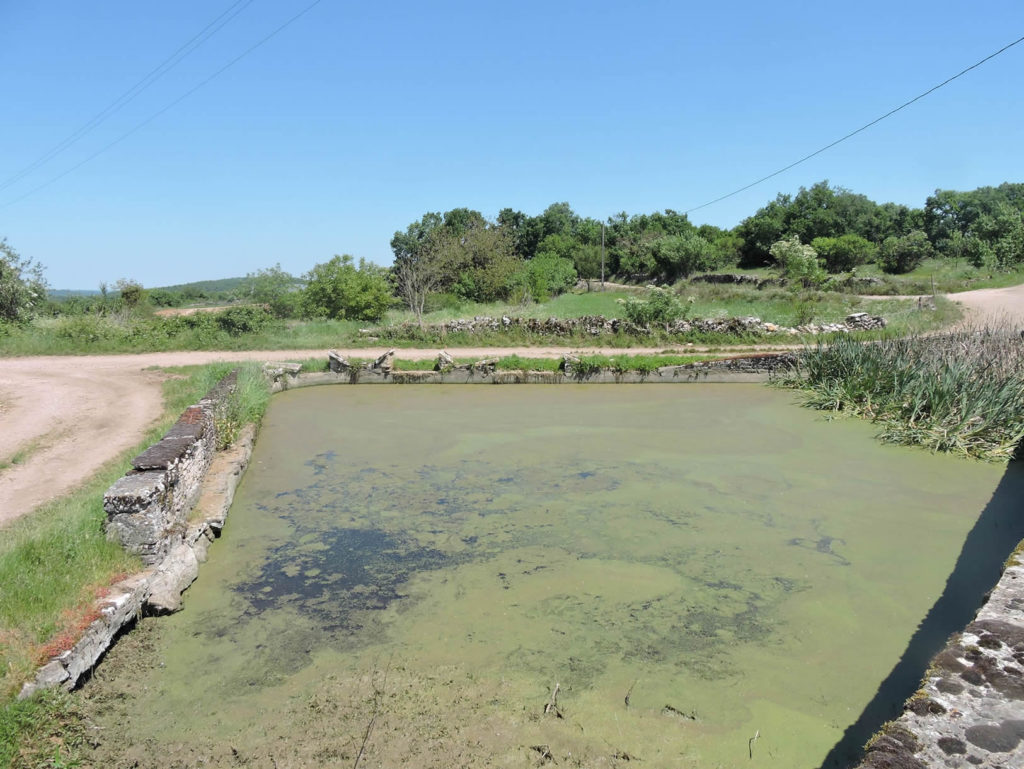 Can you dream of a bed as soft as this carpet of moss offered by nature under the oaks as straight as Mikado’s baguettes? Well! There are not only oaks in the causses, even if they have taken power. Sometimes a maple succeeds in making its nest. 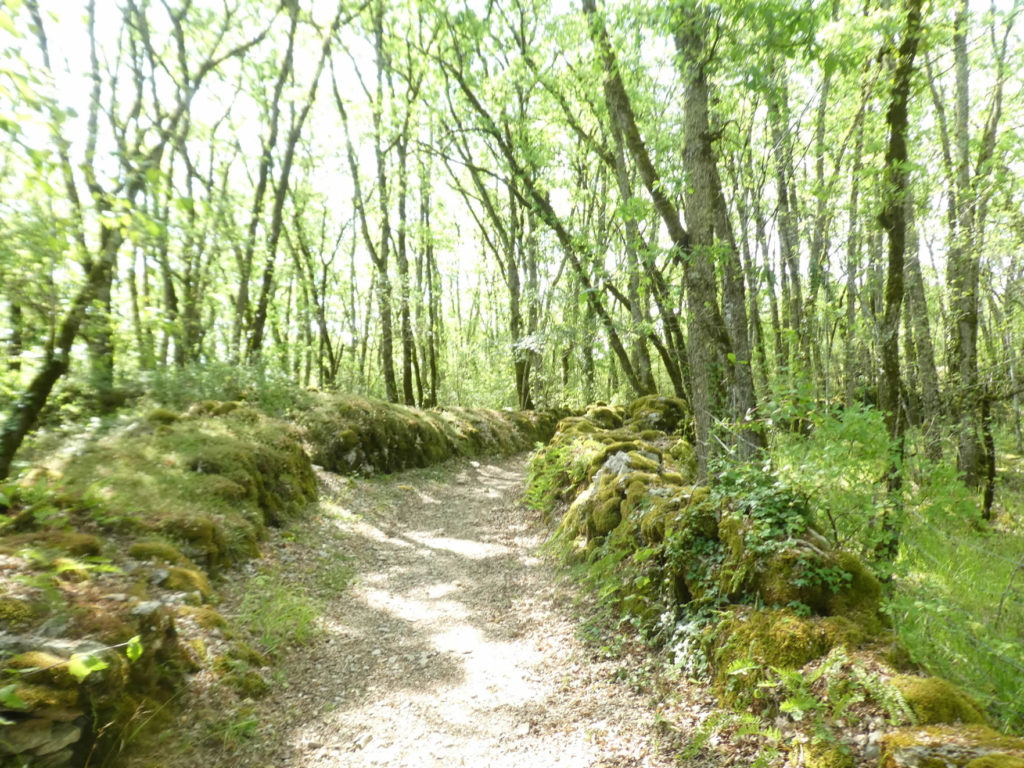 Section 5: Limogne-en-Quercy, in the land of black truffles.

The small town has less than 800 inhabitants. It is not just the pilgrims Compostela who stop here. There are lovers of the beauty of the landscapes of the causses, but especially lovers of truffles. There is an almost permanent truffle market, every Friday, from December to March, and from June to August. For truffles, the local competitor is Lalbenque, a little further on the track, closer to Cahors. Sunday in Limogne-en-Quercy is market day. 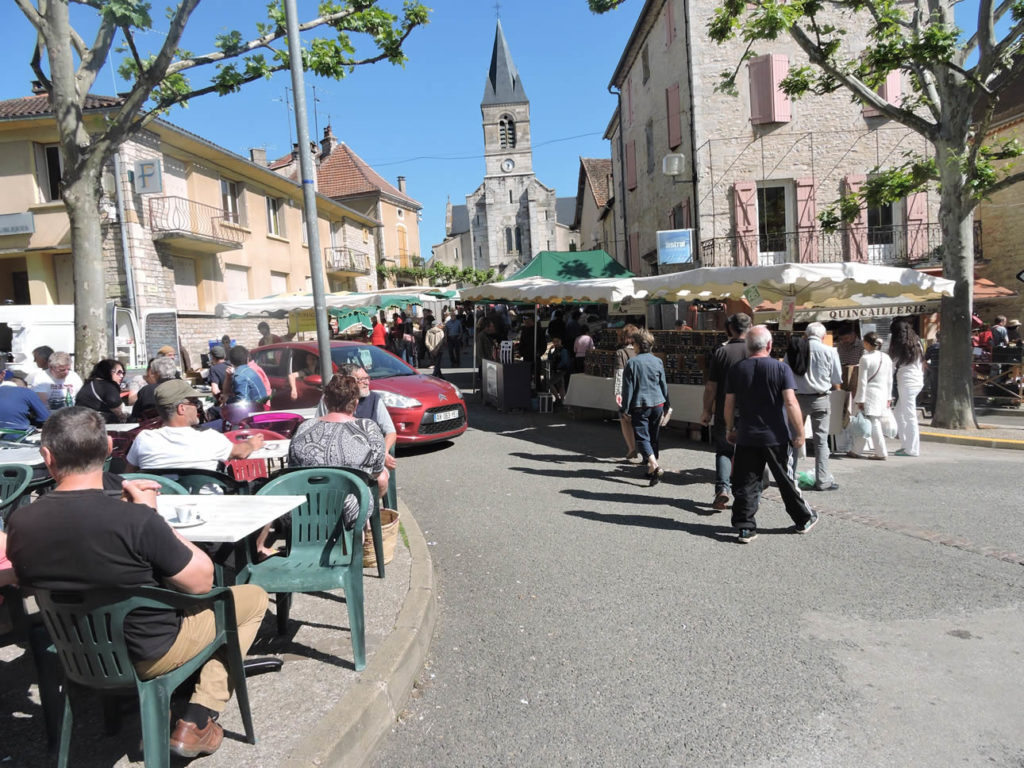