The splendor of Cami Ferrat 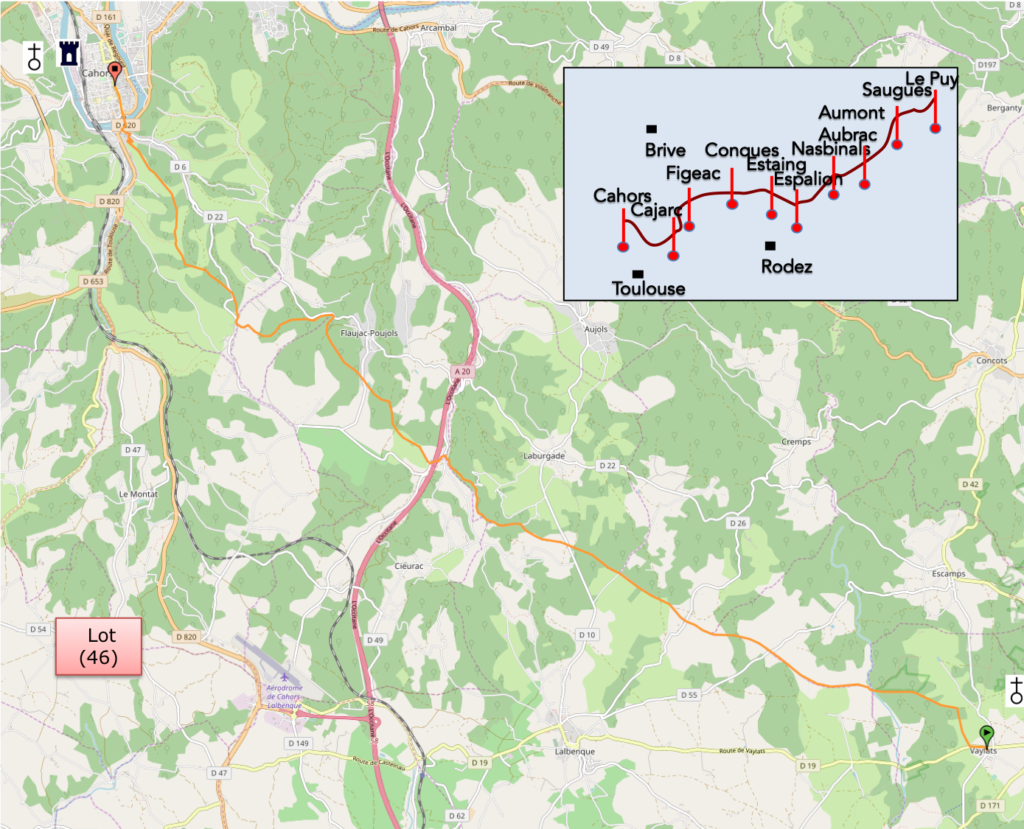 The whole network constituting the ways of Saint-Jacques in France is recognized by the world heritage. The decision to inscribe the Santiago de Compostela routes in France on the heritage list dates from 1998. By this inscription, Unesco wishes to draw attention to the exceptional universal value of this heritage. To do this, monuments or trail sections have been selected.

The track approaches Cahors, the largest town on Via Podiensis, with its 22,000 inhabitants. The journey from Bach to Cahors, the 26 km of the Cami Ferrat are listed as a UNESCO World Heritage Site. The same is true of St Etienne cathedral and Valentré Bridge in Cahors. The track runs up towards the North and the Lot plain.

The route crosses an area where there are virtually no villages. The A20 motorway, Occitan Highway, from Limoges to Toulouse, passes through here. You are still in the Department of Lot. In Cahors, you will be almost halfway between Puy-en-Velay and St Jean-Pied-de Port. This route avoids places of human settlement, which adds to the mystery of this gently hilly part of the causse

For the Romans, the way was the Via, a solid, reliable, usually straight way for the passage of carts, soldiers and horses. These tracks were often “railroad” (lou cami ferrât, in Occitan, as hard as iron), in other words reinforced with a packed and rammed coating, most often stoned. When it comes to Roman roads, the word that comes up most often is “it’s straight ahead”. When Julius Caesar invaded Gaules country, he had these roads established to move his troops rapidly throughout the territory. In medieval times, Cami Ferrat from here was an important pilgrimage route that linked Rocamadour to the South of France, and beyond, Rome and the Holy Land.

Cami Ferrat is above all a wide dirt road with little stones, but it sometimes changes structure on the way, especially when the oaks are a little denser than at the edge of the forest and the stones take over the dirt.

Slope variations (+314 meters /-470 meters) are low. The profile of the stage is now to the advantage of the walker. There aren’t any big bumps, except one halfway through. Otherwise, the track undulates gently. Only a severe and tough descent to Cahors marks the end of the stage.

Remarkable stage for the pilgrim! The Cami Ferrat is above all about wide dirt roads. Little tar, the dream, right?:

Section 1: Beyond Vaylats, you join GR path in the forest.

What marks the causses are the stones along the paths, sometimes gray, sometimes yellow and ocher, on which such a special light plays, in a country where hollow paths alternate with arid moors where junipers and boxwoods reign. and small downy oaks. The oaks huddle together, drop down to the ground, form hedges of honor to the passing walker. Oaks thrive and smother other small trees and shrubs by depriving them of light. Here you will rarely see pine trees, which need light to grow. Sometimes a few rare brooms quiver.

Here, you do not meet anyone, except the pilgrims loaded with their heavy bags. Sometimes the oak forest opens up a little to reveal some rare signs of human presence. To see cultures, you have to stare wide-eyed.

In these funnels of greenery, the forest can sometimes give way to a sort of scrub, or to plantations of truffle oaks, of which you can guess the potential presence of fungi with the round trace of earth that emerges around the trees. We know that truffles grow in poor soils, in limestone and filtering soils. You need a soil in which organic matter breaks down quickly. The mycelium of the truffle lives in association with the roots of truffle trees, downy oaks or hazelnuts. But be careful, all these trees are not ready for truffles!

Don’t assume that all truffles come naturally. Truffles are real work. They clear and plow the land favorable to the truffle. During the winter, young oaks are planted with the mycelium of the truffle. You have to wait 3 to 6 years of maintenance of these trees to hope to see the “burnt”, this grassless zone around the tree, synonymous with high hopes.

What more can be said? Nothing, listen to the silence. It’s just grandiose, out of time..

Wait for thr video to load.

General overview of the difficulties of route: course without any difficulty.

If the oaks are the masters of the forests of the causses, the boxwoods are not necessarily their servants. Boxwood is the most invasive shrub in the causses. Almost perennial, it retains its green foliage all year round. Exposed to the sun, the foliage takes on an orange color, which gives a rather impressionistic symphony of colors along the roads. Why are there so many boxwoods in the causses? Shepherds will tell you it’s because sheep hate their tough leaves. The nature of the poor soil is undoubtedly the best explanation. An undemanding species, tolerating large variations in temperature, it has little competition here, apart from the junipers.

On the way, there is sometimes a small clearing in the forest. The gaze then falls on the countryside, on the plowing truffles or on the stone walls covered with moss of Cami Ferrat. We cannot say enough about the beauty of these low walls which mark out the paths. Moss and lichen in the causses creep in everywhere, on pebbles, on trees, living or dead, weaving the space with thick curtains.

Rarely will you find in the midst of creeping aridity a few vague grains which hardly express themselves.

It is still a very beautiful dirt road surrounded by stone walls that leads to the fountain of Outriols. The water here is not drinkable. There is no water point on the course, except at the Repose-Pieds refreshment bar. Remember to fill your water bottles well before departure!

Section 4: Everyone, to the refreshment bar!

General overview of the difficulties of the route: some slopes a little more marked, but nothing very severe.

The Repose-Pieds refreshment bar is a welcome and essential stop on the track. It’s often here that you will see pilgrims congregating for a deserved break. You will do the same. The jovial owner of the refreshment stall will tell you that he has rarely seen a pilgrim run straight past his shop.

Section 5: Back to a little more civilization.

General overview of the difficulties of the route: slightly steeper hills, but no slope is greater than 15%.

Here, the horizon finally opens onto a semi-countryside that gives way to the undergrowth.

Section 6: Downhill all the way to Cahors, jewel of the Lot.

General overview of the difficulties of the route : tough descent, sometimes with more than 25% slope towards Cahors.

Then the horizon opens wide. The road begins to toughly slope down to Cahors, where you can see the railway bridge in the distance, and further still the Valentré Bridge.

The descent is very steep with a slope of more than 25% in places. Oaks, we have come across tens of millions in the past week. These will be the last oaks of the day.

Jacques Duèze (1244-1334), born in Cahors, became pope in Avignon in 1316, under the name of John XXII. It was the latter’s brother who rebuilt the paternal house into a palace. The latter was demolished for the repair of the Pont Neuf. There remains a magnificent tower, five floors high.

The bridge is a humpback over 100 meters long, with 6 large Gothic-style pointed arches. It is flanked by three square towers with battlements and machicolations overlooking the Lot, 40 meters high.

A legend runs in Cahors about the construction of the bridge. As the work did not progress much, the master builder signed a pact with the devil, pledging his soul. And of course, the bridge rose quickly. To save his soul, the foreman asked the devil to provide himself with a sieve to go and draw water from the source of the Carthusians. Clever though he was, the Devil failed in his endeavor. In revenge, he came every night to unseal the last stone of the central tower. And the game lasted for centuries …
In 1879, during the restoration of the bridge, the architect had a stone carved with the effigy of the demon affixed to the empty space. And since then, the demon has remained desperately clinging to the top of the bridge.