It is obviously not the case for all pilgrims to be comfortable with reading GPS and routes on a laptop, and there are still many places in France without an Internet connection. Therefore, you will find soon a book on Amazon that deals with this course.

Tarn-et-Garonne is a complex department, mixing at the same time influences from Gascony, Quercy, Causses, hills and wide alluvial plains of Tarn and Garonne, in a country where the sea has deposited abundantly marls and limestones. Here, three large rivers meet: Tarn and Aveyron which descend from the Massif Central, and especially Garonne, the majestic river from the Pyrenees. It was from their meeting that these immense alluvial plains were born.

Today’s stage takes place in Tarn-et-Garonne in this region of Bas-Quercy which borders Lomagne area in neighboring Gers.

The hills circle around the plains. These are low-altitude hills, barely exceeding 300 meters in altitude in the Bas Quercy that we are crossing today. Further north, the heavier, more clayey lands favored the presence of groves, pastures and the cultivation of corn. High slopes have developed on the banks of the Tarn River. The alluvial soils, made up of silt, sand, clay and gravel are rich, allow the expansion of polycultures, cereals and orchards. Huge orchards were planted in the past century, sometimes exceeding 200 hectares. Apple trees, plum trees, pear trees, peach trees, cherry trees, kiwis go hand in hand. On the slopes, the poorer soils allowed the development of the vines.

In constructions, brick is the queen.You’ll take pleasure in admiring the endless play it brings to houses, churches, castles, in the variations of its color and its warmth. But, limestone is no residue. You often see happy marriages, where brick shapes the surrounds of windows and doors. The red canal tiles are the masters of the roofs. The “bastide” were in the Middle Ages a particularity of the South-West. In these settlements, the peasants were free and worked for the lord or the abbot. The focal point was the grain hall in the center of the village. Many villages have preserved traces of this organization. At the end of the stage, the route arrives in Moissac, a real small town, beautiful in addition.

Difficulty of the course: Slope variations today (+501 meters/-649 meters) are not important for such a long stage. In terms of the difficulties of the course, it is not always a quiet day, although the course is often on a light ups and downs, rarely exceeding 10 to 15% positive or negative incline. However, there are 4 slightly steeper climbs, the one leading to Chartron at the start of the stage, the slope to climb before Aube Nouvelle, and two climbs in the forest before Moissac.

Today, alas, it will take a lot of walking on the paved roads:

General overview of the difficulties of the route: : at the beginning, steep descent from the citadel into the plain, and climb, sometimes very sloping, sometimes more than 20% in the forest towards Chartron.

Turning around, you can still admire the beautiful Lauzerte perched on its hill.

Here stands a very beautiful dovecote. These buildings, rectangular or polygonal, sometimes comprising several floors, must be numerous in the region. Many hiking trails are devoted to it. It is said that a long time ago, the construction of these towers was regulated for the use of the nobles, then it became more democratic. Of course, pigeons were bred for their flesh and for fertilizer from the feces, but above all, this had the advantage of emphasizing the prestige of the owners.

Section 2: In the wheat fields of Tarn-et-Garonne.

Sometimes all it takes is a bend in the road for the scenery to change. For a few kilometers at least, the crossing of the oak groves is almost completed. Who would have imagined that behind the grove would open up a country almost as vast as those that one crosses on the Spanish way to Santiago de Compostela in the Meseta. But, it’s not the American Midwest after all. Long live the Tarn-et-Garonne countryside with its fields of cereals, sunflowers and orchards.

Section 3: In the orchards of Tarn-et-Garonne.

General overview of the difficulties of the route: light ups and downs, with a little more difficult ramp before Aube Nouvelle. 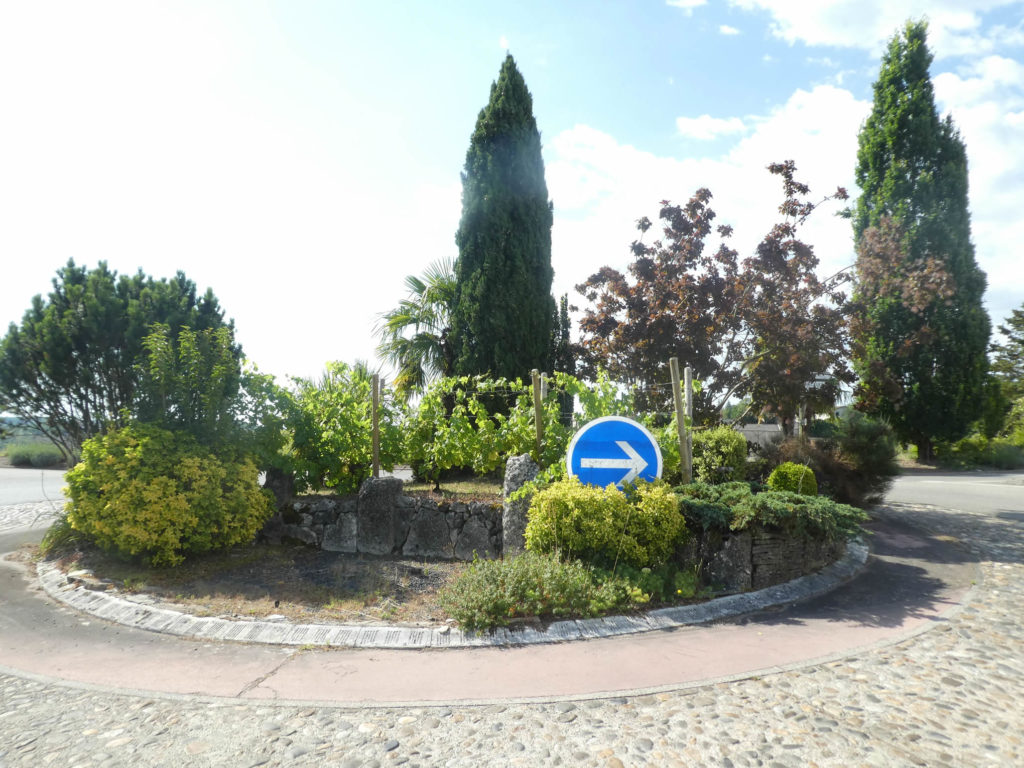 Section 4: Between orchards and undergrowth.

General overview of the difficulties of the route: a few light ups and downs.

At the bottom of the valley, even if the area is quite marshy, the pathway crosses Lambenne stream and its pretty little lake. You cannot stress enough the comforting presence of these bodies of water on the track, synonymous with plenitude for the walker.

Section 5: Along the Laujol stream, but not only…

General overview of the difficulties of the route: steep slopes, sometimes more than 15%, both downhill and uphill.

… until you find a small paved road that seems to go nowhere, except for the organizers of the new GR65 path. They created a farce from scratch, to put it mildly. Formerly the route flattened in the undergrowth, along the stream, parallel to the road. Yes, there was the very quiet noise of the engines, but that in no way hampered a smooth running. So, they figured it would be a good idea to spice up the ride a little bit. Why not, if it’s good for exercise! So, let’s go. We will give you our opinion on the matter later.

The pathway is not very stony, but the slope is steep under the oaks and chestnut trees which inhabit the forest here.

Section 6: Between orchards and undergrowth.

General overview of the difficulties of the route: : a few ups and downs without great difficulty.

Section 7: On the way to Moissac, on the banks of Tarn River.

General overview of the difficulties of the route: easy course.

Moissac Chasselas has been an AOC since 1971. It is a crunchy white grape, with a refreshing pulp and an excellent sweet taste reminiscent of honey. According to legend, Suleiman the Magnificent gave Francis I seedlings of Chasselas, which were first planted at the Château de Fontainebleau. This grape quickly became the dessert of kings. It was in 1857 that the cultivation of Chasselas began in Moissac. People came here for grape cures, which gave the city a great boom, where hotels, restaurants and casinos were built along the Tarn.

The name Chasselas comes from the Burgundian town of Chasselas, near Mâcon in Saône-et-Loire, where the grape is made. Today, 660 hectares are entitled to AOC, over an area stretching from the north-west of Tarn-et-Garonne to the south of the Lot, in Quercy. Today, there are 328 Chasselas producers, for 3,000 to 4,000 tons produced each year. Moissac Chasselas is just a table grape. It is not vinified, which is not the case with Chasselas from the Loire Valley which gives part of Sancerre, and that of the cantons of Valais and Vaud in Switzerland, which provide most of the white wines. from this country.