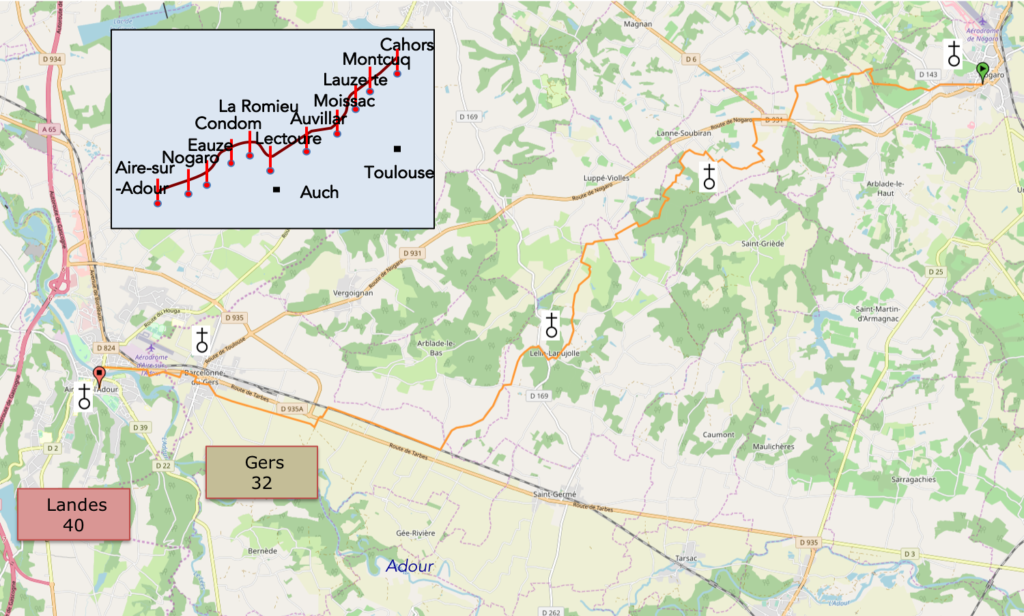 Almost another whole day crisscrossing the small hills of Gers and its large corn fields that descend to the great plain of Adour River. The track now leaves in a westerly direction, crossing the end of Gers, to bathe its feet in Adour River, on the edge of the Landes department, the department that gives access to the Atlantic.

On leaving the Pyrenees, the Adour River flows through the heart of the long plain of Bigorre, before entering Bas-Armagnac in an opulent valley. In Aire-sur-l’Adour, the river enters the Landes department. The lands it crosses are fruitful. Corn is everywhere, alongside rarer orchards and vines. Vines and corn compete for a country where, above all, ducks (minus geese) invade ugly green plastic breeding tunnels. Corn, you had an idea when crossing Gers department. Here, in this country of transition between Gers and Atlantic Pyrenees via the Landes, corn, you will swallow it, until saturation. This region is the largest producer of corn in France. In the Landes, 69% of the agricultural area is planted with corn! These beautiful golden grains are needed to feed the 11 million palmipeds in breeding, including 8 million in force-feeding. With these volumes, Les Landes is the leading producer department in France with a quarter of national volumes.

The vine is also present. Armagnac is made as far as Aire-sur-Adour. You will cross in particular the vineyard of St Mont, a vineyard located in a landscape of hillsides and molassic hills in the middle of corn crops. Here, the red wines are made mainly from tannat and cabernet. You are not very far from Madiran and its famous tannat. For white wines, ancestral and indigenous grape varieties are used, such as petit curbu or arrifiac. Manseng, the fame of Jurançon, near Pau, is also used in the production of wines.

The passages on the asphalt road clearly exceed the routes on dirt or grass:

Section 2: The track returns to the plain.

Section 3: Between undergrowth and crops.

There hides a beautiful little lake, lost in the middle of nowhere, where oaks and other hardwoods soak their foliage in the brown, still waters.

You’ll enter part of the great vineyard of St Mont, one of the jewels of the region’s wines. They even salute on the billboard the courage of the pilgrims who venture here.

Along the way, in Brana hamlet, an owner has lined his garden with tangible signs that the pilgrim knows well. Cairns, these piles of stones, which can vary from simple rickety clusters to learned architectural prowess defying the balance, you find them all along the way. The cairn, also called montjoie, is placed on purpose to mark a particular place or an intention. It has an old Celtic origin. In Scotland, the custom is still to carry a stone up the hill to place it on a cairn. Pilgrims often enjoy completing these fragile temporal sculptures.

Section 6: In the infinity of the dreary plain.

Section 7: Fortunately, there is Aire-sur-Adour at the end of the road.