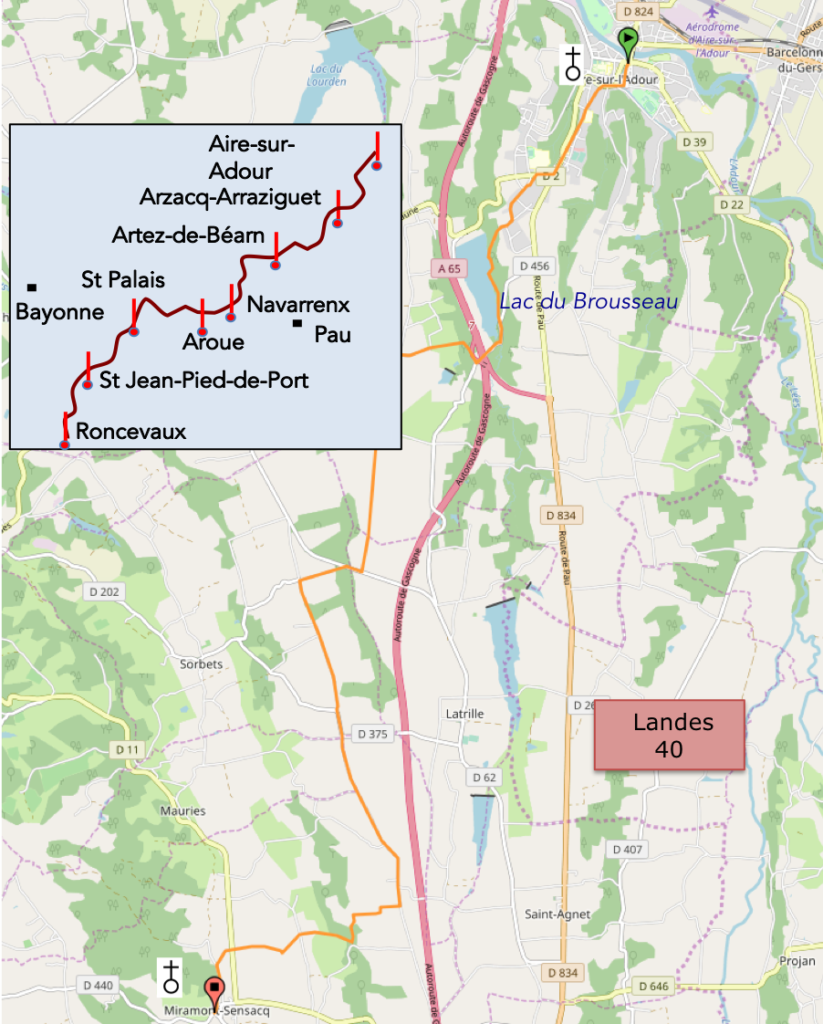 For a large number of tourists, the Landes department boils down to wide rows of pines in a horizontal landscape near the sea. But, in reality, the department has three major types of quite different landscape: the coast, the Landes plateau and the territories of Adour to the east formed by the regions of Chalosse and Tursan, a country of mainly hills. If the Landes plateau is poor soil, allowing little more than the growth of pines, the silty and clayey soils of Tursan, where the track passes today, are richer. Admittedly, this is not wheat land, but the corn here finds great expression. In these territories, punctuated by groves, especially oaks, the population density is low, with many small isolated farms and small towns. The duck is present everywhere, along the immense fields of corn. The Landes department is the largest producer of duck livers in the world.

With a slight bias, we will say that this is not the most beautiful stage of the Camino de Santiago, unless you are an unconditional admirer of the cornfields. But now, sometimes there are inevitable transitions. It is almost a given that if there were any means of public transport in France worthy of the name, many pilgrims would skip these long and soulless stages here. Moreover, between Aire-sur-L’Adour and Arthez-de-Béarn, we have only passed once, and far from us the idea of returning there one day. This in no way calls into question the hard work of the peasants who live and work in these regions. Accommodation options become more difficult the closer you get to the Pyrenees. Here, many pilgrims go in a single step from Aire-sur-Adour to Arzacq-Arraziguet. But, it’s a stage of almost 35 kilometers. From then on, there is the possibility of cutting the pear in half, stopping at Miramont-Sensacq, halfway through the route, or a little further on at Pimbo. But watch out for accommodation. They are minimum portion.

Difficulty of the course: Slope variations (+223 meters/-77 meters) are insignificant today. It’s an almost flat stage, which presents no difficulty on the course, a day of rest in a way.

Section 2: On the tar, through the cornfields.

Section 3: On the paved road, through the cornfields.

We are now around mid-September. Soybeans have grown and sometimes cut through the dreary monotony of the cornfields. Rare beet fields do the same.

This is where the pathway crosses the large Bahus stream.

Section 5: A stop at Miramont-Sensacq.

Yet here, you may have the feeling that the country is changing. There are even cows eating grass, real grass, because in the area grasslands are scarce.