It is high time to rehabilitate the passage through St Palais

Most of the tracks in the Basque Country between Aroue and St Jean-Pied-de-Port are listed in the UNESCO Pathways Heritage. The good doctor Clément Urrutibehety, of St Palais, worked enormously in this direction. But, he did not succeed in having the routes to St Palais classified for pilgrims coming from Le Puy. And yet! UNESCO has recognized the ford of Quinquil over Bidouze River, at Behasque-Lapiste, although no pilgrimage track runs there today. The ford, through which pilgrims used to pass, is now weathered, masked by the waters of the river for part of the year, abandoned in the brush. Some are still crying out in the desert for the ford to be rehabilitated and for the Camino de Santiago to be taken to St Palais, where it has always been in the Middle Ages, at least they believe. So today we will walk to St Palais, although the last part of the route is not very appealing.

Beyond Château Johanto/Aroue, there are many routes to reach St Jean-Pied-de-Port. To start with, there are two ways to reach Olhaïby. Pilgrims who have stopped before Aroue at Ferme Bohoteguia or Bellevue, when they pass Chateau Johanto, turn directly left to follow GR path. Those who have been to sleep in Aroue often take the Aroue variant, a little shorter, and perhaps a little less beautiful than the other. The two paths meet shortly before Olahïby. Today the weather is wonderful. We will therefore take GR path and not the Aroue variant. There is no photo. It is much more beautiful, even if it is a little longer.

Then, in Benta, another choice arises. GR path heads towards Larribar-Sorhapuru, then Beneditenia. Most pilgrims follow this route. They stop lower down, most often at Ostabat, because the stage to get to St Jean-Pied-de-Port is clearly too long. Another possibility is to make a small jump to St Palais. In the past, this track was only partially signposted. But you can’t get lost. Today it is, being featured on Miam Miam Dodo. Beyond St Palais, the track joins GR path back at Beneditenia.

There is therefore politics in the classification of tracks by UNESCO. Far be it from us to say that this stage should not have been classified, but the whole stage is not beautiful. It is magnificent up to Benta. But between Benta and Beniditenea, it’s not the enthusiasm that will lift your soul. You have to wait for the climb to Soyarze and the passage to Haranbeltz to find the grandeur and majesty of the track.

So why go to St Palais? St Palais is a stopover town for pilgrims who followed the Vézelay route and the Tours route. All the main roads of Compostela therefore meet before Ostabat. Going to St Palais, you will find a beautiful city, at the foot of Bidouze, the beautiful river that never ceases to meander in the region. And then, the next day, you will walk on one of the most beautiful sections of the Camino de Santiago, the magnificent path of Xibaltare inaugurated in 2014 to replace the old section of GR654 path. It is a track that runs through an altitude botanical garden, passes over the hill of Mont Saint-Sauveur, where the wonderful contemporary statues of Christian Lapie stand against the Pyrenees. The site is exceptional, with a bird’s eye view of Beneditenia and its lunar climb towards Soyarce Chapel. It is perhaps the most beautiful point of view on the entire Camino de Santiago, as much as the Roc des Loups in Aubrac.

Here you will find most of the route to Benta, which we described in the previous stage to Ostabat. But, as you already know, we will be briefer. On the other hand, you will then be able to see these breathtaking landscapes with a new eye, that of good weather. We are going to show you images of a route taken several years ago. In the meantime, many sections have been tarred. This is the classic life of the Camino de Santiago. Alas for the walker, if not for the peasant!

Difficulty of the course: The day’s stage is not very long, with slight slope variations (+304 meters/-389 meters). There is only a slightly more sustained climb after Aroue and a steep descent towards Bidouze River to note. Until Benta, the route follows the magnificent hills of the Camino de Santiago. Then, on the variant of St Palais, a dirt road follows the ridge for a long time, before plunging to Bidouze River. The rest of the course is not very exciting. You have to slope up to Béhasque-Lapiste and then follow the departmental road that heads to St Palais. On the other hand, St Palais is a real gem, with its old houses clinging to the river.

We warned you. Housing is quite poor throughout the Basque Country. You will therefore have to walk to St Palais to find accommodation.

The passages on pathways and paved roads are almost :

General overview of the difficulties of the route: flat on the road, then uphill, often steep (but less than 15%) towards the hill.

Here, GR path turns left and passes near the calm, green waters of a jewel of a small lake that dozes in the greenery.

How great is the serenity inspired by this wooden cross where the wishes of pilgrims are piled up under the great multi-centenary oak tree? Obviously, the crosses remain an obligatory place on the Camino de Santiago.

So, all you have to do is observe the hanging udders of these beautiful specimens of sheep from the Basque Country. The black-headed Manech, whether sheep or ram, easily recognizable by its haughty bearing, proudly wears horns above its black head, its hanging ears, its body covered with white wool, mounted as it is on legs also black. The red-headed Manech, aesthetically, has fewer advantages in existence. The species is hornless. But the white fleece is more imposing, with long hanging locks. Its head and legs are reddish, hence the name of the species. But then, on the udder side, there is no picture. It is the most productive in the area. Crossbreeding also occurs between these breeds, as seen in this herd. To make the AOC Ossau-Iraty cheese, you will also add a little milk from basco-béarnaise, the most common sheep in Béarn.

Behind the placid cows, you see the Pyrenees taking shape better and better in front of you.

The pathway climbs among the herds to the top of the hill. It’s the only slightly more strenuous climb of the day. Don’t these landscapes remind you of the majesty of Aubrac? For the happiness of the pilgrim, he often only needs an empty space which he can furnish at his ease, where he lets his imagination wander.

Magic, the word is not too strong.

Section 2: Ups and downs in the undergrowth and pasture.

General overview of the difficulties of the route: course without difficulty, most often downhill, even if some slopes can be around 15%.

Be careful on the track. All pathways and small roads are alike. Directional signs can be found all over the course, but they are of little use. Focus your eyes on the red and white signs of the GR, at the risk of getting lost. Even the direction for the village of Olhaïby is never indicated. This is often the problem when the panels multiply. They only confuse the pilgrim who walks.

There are probably only peasants who live here. Who else would come and get lost here in a region, almost outside of civilization? It is hardly the pilgrims who advance under their bag, apart from a few rare peasants encountered here and there, who give a touch of color and life to these regions. This is often how the Camino de Santiago shows its best soul.

Olhaïby, this name resonates in the ears of pilgrims. But, there isn’t much to get under the eye, just a handful of 3 to 4 houses. The chapel is a stone’s throw away, at the end of the village. But beware! GR path does not go there. You will have to retrace your steps. From then on, pilgrims hardly make the detour there.

Section 3: In the pastures celebrated by UNESCO.

General overview of the difficulties of the route: course without great difficulty.

Are you not far from the world in this universe of gentle hills, with the Pyrenees as a backdrop?

Be careful here if you intend to continue on St Palais. Benta is just a stone house by the side of the road. A sign invites you to stop at the Former Franciscan Convent at St Palais. Here, the pilgrims going to Ostabat turn left, those who wish to go to St Palais go straight ahead.

Today we will go to St Palais. 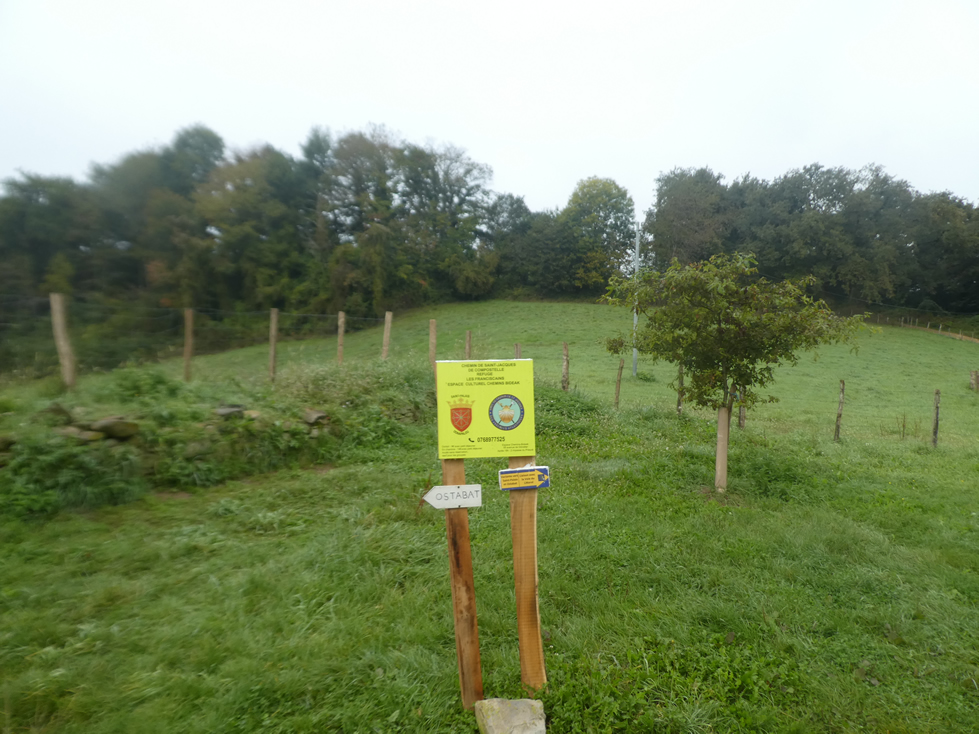 Section 4: At the bottom of the valley flows the Bidouze River.

General overview of the difficulties of the route: slopes often steep downhill and uphill.

Soon, on the horizon you can see St Palais through the foliage. But, you are not there yet. Far from it!

Section 5: In St Palais, on the Bidouze River.

General overview of the difficulties of the route:course without any difficulty.

The river is a stone’s throw away, greenish, calm and welcoming. The trees make him like a dark crown.

At the end of the park, you’ll arrive near the bridge over the Bidouze, near a waterfall on the river. No one can say here whether the pilgrims of old who missed the slippery stones of the Quinquil ford upstream, would not have risked their skins here as well, by sneaking over the stones of the river.

Piperade is a must in the Basque Country. It can be cooked in all sauces, if we dare say so. It accompanies Bayonne ham, chicken, lamb stew, eggs or fish. Everything somehow! If it is called piperade (from the Occitan Béarnais piperrada, piper: red pepper), it is because the dish contains pepper. Of course, Espelette pepper, the country’s flagship product. Although piperade is traditionally red, you can vary the colors and flavors by choosing purple onions and yellow or orange peppers, and adding zucchini. This dish is made by browning seeded tomatoes, peppers, onions, or other vegetables in an earthenware pot (cazuela). I’s also added thyme, bay leaf, garlic, a pinch of sugar, and of course the Espelette pepper. Slowly cook everything, covered, over low heat. The longer you wait, the more the peppers are tender and pleasant in the mouth.